Jose Baez represented Casey Anthony in the infamous trial of her daughter Caylee’s murder. He is no longer representing Casey so he cannot comment on her personal life. She did sign a waiver allowing him to publish a book about what he knew during the trial. Going back, would Baez represent Casey Anthony again? 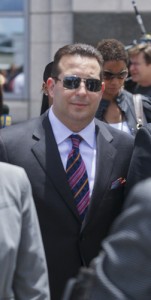 Jose Baez said he would still represent Casey Anthony knowing what he knows today. He feels it is his duty to give everyone an excellent defense. (Ira Bostic / Shutterstock.com)

There are several rumors circulating about Casey Anthony today. She has supposedly filed bankruptcy for debts up to $800,000. Reports say she has reconciled with her father, George, who she accused of abusing her as a child. Casey has a new lawyer now who is representing her civil lawsuits. Baez said the civil suit is frivolous and anytime anyone tries to sue Casey Anthony they get a lot of media attention. This is one of the reasons he is no longer representing her.

Baez hopes that Casey Anthony gets help for whatever problems she may have. He had no idea when he took the case that it would become what it has. He made many personal sacrifices and put his family in a hard place. He regrets the strain it put on his family, but believes that everyone deserves a solid defense. If he were asked to do the trial knowing what he knows today, he would still represent her.

Baez said he had 26 bar complained about his work on the Casey Anthony case. He hired an ethics lawyer before the trial began to make sure that every move they made was made ethically and correctly. He was the first person in his family to go to college and he went through a lot of adversity. He said that he stood in a line of fire for Casey Anthony. No one has found him at fault for the way he represented his client.

In his final comments, Dr. Phil said he knows one thing for sure. It’s not uncommon for the public to get upset in the way a jury rules on a verdict. What we know in public opinion and what the jury knows is vastly different. Dr. Phil believes the jury gets it right because they go by the law and base decisions on evidence.