What happens when your teenager is completely out of control? A lot of screaming, apparently. Dr Phil wanted to help parents Clint and Tracy figure out what to do with their troubled 17-year-old daughter, Callie. This teen daughter’s physical violence is harming everyone in her family.

Tracy is an award-winning schoolteacher, but things aren’t going well at home. Her daughter has turned violent and is prone to outbursts. The girl used to be sweet and loving, but now her mom said she is just vicious. 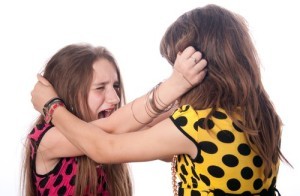 Dr Phil met parents who say their teen daughter’s physical violence is tearing their family apart. She beats her parents and they videotape her outbursts.

Home videos show how out of control, loud, and upsetting the girl is around the house. Her mother is afraid of her violent behavior and tantrums. She has caused damage around the house and will go after any family members.

Father Clint said he doesn’t know how to manage his daughter anymore. The police have been to the house multiple times, once because Callie broke her mother’s nose and gave her two black eyes.

Callie does not seem to like being recorded, but they tape interactions with her because she will later deny that incidents have occurred. Clint would rather be deployed in Iraq than live overseas. Dr Phil said he could not believe this happened overnight.

“This is a family problem,” he told the parents. The police visits have escalated as Callie’s behavior has spiraled. “If you want this fixed, it’s not about Callie.”

Tracy said the behavior only happens in the family home. One of the most explosive fights between Callie and her mother happened on video. Tracy was attempting to confiscate her daughter’s phone.

There was screaming and the camera work was shaky. Eventually, Clint had to intervene and pull his daughter off his wife. Tracy knows that her daughter does not like having her belongings taken away. Yeah, that’s why it’s a punishment.

Dr Phil advised that engaging in physical battles brings the parents down to their daughter’s level of immaturity. “You’re contributing to the crisis,” he said. “There are no teachable moments there.”

What do you think about this explosive situation?