In addition to destroying her family with her alcoholism, Jessi is a binge eater who goes on a binge two to three times every day before throwing up and leaving her mother to clean the toilet. She told Dr Phil’s team that she can vomit without using a finger.

Joy showed off the locked food cages she keeps in her fridge and pantry to contain everything, so that she cannot eat all their groceries. But she said she keeps figuring out the codes, no matter how often they are changed.

She said that she gets a thrill from sneaking around the house at night when everyone else is asleep so she can raid the food supply. Brother Josh said it’s embarrassing to have to explain to guests why their food is locked up. 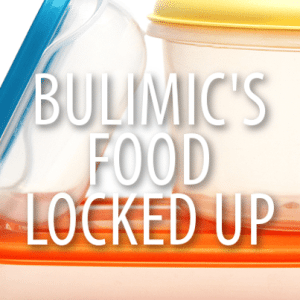 Bulimic and alcoholic Jessi’s family has food cages in their fridge to keep her from binging and purging on their groceries. (Evgenia Bolyukh / Shutterstock.com)

The family has sent her to various rehabs, costing tens of thousands of dollars. Jessi told Dr Phil’s team that she has never succeeded in rehab, but has manipulated her way into being released each time.

After this video, Dr Phil invited Jessi to return to the stage after storming off. Dr Phil talked with her about her anger when he questioned her child custody arrangement. He told Jessi he is not motivated by guilt like her parents.

Dr Phil told Jessi she was third on the list of his priorities, after protecting her son and her family. Jessi continued to wipe back tears while Dr Phil called her out for manipulating everyone around her.

In another video, Jessi talked about her custody arrangement, saying that she sees her son for seven to 10 days each month. “She loves the addiction more than she loves anything, including her son,” Joy said.

Jessi said that alcohol often wins out in the fight for her attention. More home videos illustrated how sad the situation has become. Dr Phil said that she would never think or say these things when she was sober.

“If you’ve got the guts to step up and do what you have to do, you will spend the rest of your life with your son at your side,” Dr Phil said. But her behavior would have to change to get these results. “You’ll die for your son, but will you live for him?”