Dr. Phil has been talking to Chris and Amy, whose 12-year-old daughter Sarah suffers from a case of Tourette Syndrome so bad, she’s a danger to herself and the people around her. Sarah will hit herself, headbang into objects, hit her parents and anyone else around her, and even once tried to stab herself in the eye. She has no control over any of this, because people with Tourette Syndrome have uncontrollable ticks. 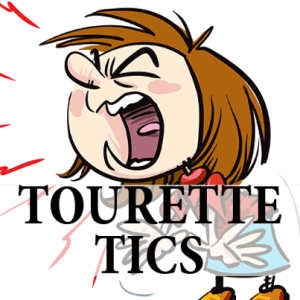 Dr. Phil learned that both Amy and Chris had Tourette Syndrome like their daughter and heard about Sarah’s abuse of her little brother Logan. (Moriz / Shutterstock.com)

Chris was diagnosed when he was 6. He said that his tics were numerous. He would twitch his head, stretch his neck, stretch his mouth, he’d yell, and he’d stick his tongue out and droll. He ended up dropping out of school in 9th grade because kids were too cruel to him and it was hard to concentrate.

“When I look at Sarah and I realize how much more severe she is than I was, I just feel really bad,” Amy said.

Both Amy and Chris considered not having children, but they’d heard Tourette Syndrome skipped generations. Even if they had a child with Tourette Syndrome, they didn’t think it would be this bad. “We were hoping to get lucky,” Amy said.

Dr. Phil: Their Daughter Said She Wants To Die

Sarah has told her parents that she’d rather die than go through what she’s going through. Amy said when she says that, she just tells her daughter she loves her and that she’s doing everything she can think of to help her.

Amy and Chris’s marriage has been strained over this, but they both said that they’re not trying to work on that. They’re trying to save their daughter’s life.

Dr. Phil: Does Her Brother Have Tourette Syndrome?

Amy and Chris have another child named Logan, who is 8 and is scared of his sister. Sarah has threatened to kill him on numerous occasions and choked him a number of times. Amy said Sarah could kill him.

Logan has had some tics off and on, but they don’t hurt him in any way. Logan still loves his sister, despite the abuse, and he rubbed her back and legs the other day at night because her tics were bad.

“I want my sister to get help, because she’s had a bad life. She’s a nice person. I let her play on my tablet,” Logan said.

Amy said she feels bad, because she worries that they’re missing out on things they could be doing with Logan while they’re taking care of Sarah.