Amanda was diagnosed bipolar in 2010. She fights with her family, has explosive emotions, and believes that her sister and mom have it out for her. 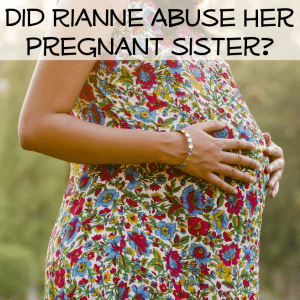 Rianne was accused of abusing Amanda when she was pregnant. Amanda, diagnosed with bipolar disorder, thinks her sister wants to hurt her.

Amanda was eight months pregnant when her sister attacked her. She called the cops and told them that she doesn’t want to hurt her family, but they’ve been hurting her. She told the police that Rianne said she didn’t care if she killed her baby or not and kicked her in the stomach. Rianne vehemently denies this story.

The sisters began to scream, cry, and deny hurting each other. Amanda said her mom held her down while her sister kicked her in the stomach. Rianne kept yelling, “Well, then where are the bruises?” Amanda doesn’t think Rianne is telling the truth.

The sisters were clearly emotional. She said she was scared, but Dr Phil assured her he was on her side. The side of help. He told Rianne that if she knows her sister has a mental illness, Rianne’s behavior to her sister is not right. Whether Amanda is lying or not, Rianne is being aggressive and abusive.

What Rianne cares about is not that her sister has a mental illness, and not that she lies. What Rianne is upset about is that Amanda got her discharged from the Army. Rianne lost a lot of weight and get prepared for the Army, and then Amanda stole her dream.

She is still angry about her discharge and believes it’s her sister’s fault. She has rage toward her sister and wants to be able to let it go.