Dr. Phil: What Is Plaque Psoriasis?

Dr. Phil sat down with a woman named Seger, who suffers from severe Plaque Psoriasis. August is Psoriasis Awareness Month, so he talked with her in part to raise awareness. Psoriasis is a painful condition that has a real stigma attached it. 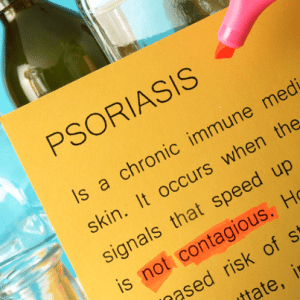 In honor of Psoriasis Awarness Month, Dr. Phil talked to someone suffering from the condition about her struggle with it and heard from a professional about what the condition is. (alejandro dans neergaard / Shutterstock.com)

Seger is a 26-year-old mother of two who has suffered from the condition for almost seven years. The condition involves having extreme, painful patches of skin on the scalp, arms, chest, knees, face, and hands. On a daily basis, Seger has to take into consideration her Psoriasis. She wears her hair big to conceal her Psoriasis. She also avoids putting her hair in a ponytail to conceal the Psoriasis on her ears, especially since they bleed often.

Picking out clothes is also a challenge, because she has to make sure that her sleeves are long enough. If she wears shorts, she makes sure they go to her knees. She also avoids dark colored clothing because of her Psoriasis flakes.

Seger came on Dr. Phil to talk about her condition and Dr. Phil was also joined by Dr. Frieda Lewis-Hell, Chief Medical Officer of Pfizer. Dr. Frieda Lewis-Hall said that Psoriasis is a chronic inflammatory disease where your immune system tells your skin cells to grow too quickly. Those overgrown skin cells grow in patches or plaques anywhere on the body. Dr. Lewis-Hall said it is 100 percent not contagious. Seger said that people often think she’s contagious or that she has some kind of weird disease.

In order to develop Psoriasis, you have to have a genetic predisposition and a trigger like stress, infection, an injury to the skin, and even certain medications.

People with Psoriasis often experience discrimination, such as being refused service at hair salons and not being permitted to use pools. Seger said that once she was even at a cell phone store and the saleswoman reacted badly when she saw Seger’s hands, which had a bad flare up.

Seger said she’s teaching her daughter that everybody is beautiful inside and out. She wondered how she could be a good role model for her when she doesn’t feel that way about herself.