Jenny has dissociative identity disorder, also known as multiple personality disorder. She has 22 personalities and one son that is very concerned about his mother’s mental state. There is J.J., the aggressive identity, and Janae, the homicidal and angry personality, along with many, many more. Jenny’s therapist of 20 years, Judy, has been working to control the personalities and wrote a book, 22 Faces, about Jenny’s life and struggles.

Jenny was horribly abused from a young age. Her father and another prominent man in her life severely beat her and used her growing up. She said even once witnessed a human sacrifice. She remembers being bound and there being another woman. A satanic priest went over to the girl and she stopped screaming. Judy believes that these instances caused Jenny’s multiple personalities to come out. 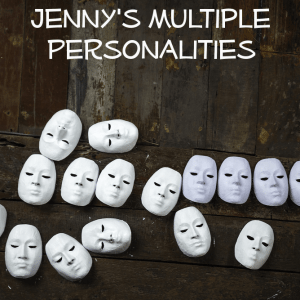 Jenny has 22 identified personalities. From raging homicidal to sassy, Jenny’s “Alters” are documented in her therapist’s book “22 Faces.”

Growing Up With A Mentally Ill Mother

Jenny’s son Robert has been the brunt of the 22 personalities his entire life. She once had him committed to an institution because she thought that he was leaving the gas burner on the stove and lying to her.

Robert believes that Judy is using Jenny to further herself. Jenny disclosed her journals and private sessions with Judy for the book, 22 Faces. Judy doesn’t think that she exploited Jenny because Jenny gave her permission.

Robert said his mother always wanted her story told. Judy took the information from the Alters, or the 22 personalities. She said that the Alters were mainly caused by the ritualistic abuse of her parents and a “Nazi Mind Controller.” It’s a tall order, but Jenny swears it’s true.

The book was taken from the journals of Jenny’s alters. Judy has backtracked and researched her information to make sure if much of the information was fact or stuff made up by the Alter. Judy knows about 50 people with multiple personalities.

Robert takes issue with some of the information in the book. He hasn’t found any “Nazi Mind Controllers” in his family history. In fact, a lot of his mother’s story is different from information he knew before about Jenny’s story.