Dr. Phil: Doug Perry – Fellowship Of The Martyrs Is Not A Cult

James claims that his wife has been keeping his children in a religious group that is not only cult-like, but outright dangerous. The Fellowship Of The Martyrs (FOTM), is not a cult, according to founder Doug Perry. Eight years ago, Doug claims to have had a vision from God that told him the way things needed to be. He started a YouTube channel and a website to promote his ministry, and roughly 50 percent of the funds that come into his ministry come from these web sources.

Doug Perry is a firm believer in demons. He says they can take on many forms, ranging from ticks to octopuses (his words, not mine), and it is his mission to fight those. He claims to have been gifted with the ability to speak in tongues, something that he immediately said he would not be performing on cue like some sort of magic trick.

Doug says that no one is being controlled, no one is being forced to stay, and that most of his congregation is made up of former meth heads, addicts, and even child abusers. He even had one person set himself on fire in the parking lot once. 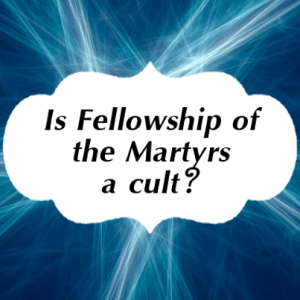 Doug Perry insists that Fellowship Of The Martyrs is not a cult.

Doug Perry came on the show to talk about the vision he had that changed his life. One day, a voice told him to go into his trophy room, where he had put his awards and other worldly accomplishments up on the wall. When Doug got into the room, God asked him to look at the wall of trophies and awards and tell him what he thought of it. Dough thought it was “pretty cool,” but God retorted, saying “This is all crap,” (that’s the actual quote) and demanded he throw it all away because he was committing idolatry.

Doug Perry, in some of his internet sermons, claimed to have seen people instantly healed of everything from addictions to lupus to fibromyalgia. Dr. Phil said that the implication of these proclamations is that those that have these disorders and diseases, if they would just believe, would be healed of these ailments, which he thinks is insulting to their sensibilities.

Doug says that he never implied that, and is not speaking from any superstitious background.

Doug also claimed to have been praying for Newtown, Connecticut for four years prior to the shooting, which Dr. Phil said he found no proof of in his 900+ YouTube sermons. Doug said that he never presented this as proof that he could speak to god.

Dr. Phil: Doug Perry Has Proof He Is Not A Cult

With former members writing in to Dr. Phil to say that, when they left, they received threats of violence from Fellowship Of The Martyrs “members” (Doug doesn’t like to label the people he preaches to, and he says that is an outright lie), Doug Perry decided to get a professional opinion on whether or not his ministry was a cult.

The professional said that he found no evidence to suggest that FOTM was a cult, but said he never gave Doug permission to use that letter to support his cause or that it was a blanket approval of everything that went on at the ministry.