By ages five and six, Ralph had given both of his sons pocket knives and taught them a game where you spread your fingers and bring the knife down between them individually, going faster and faster with time. One of their sons tried this and sliced his thumb wide open. In addition to the knives, Ralph has also gotten their sons BB guns, which he hasn’t taught them how to properly use. 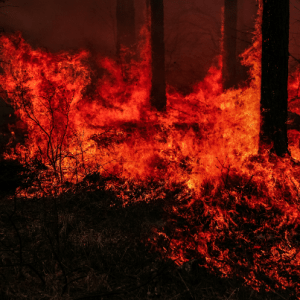 The child abuse and neglect were so bad that Jennifer and Ralph’s kids started a forest fire.

It should come as no surprise that Ralph is teaching his sons some violent tendencies, he has been known to subject his kids to child abuse. After Jennifer gave birth to one of their daughters, she was letting her put herself to sleep one night. She was probably crying, and Ralph lost his cool, going into the bedroom and pushing the baby’s face into the mattress while she flailed around helplessly. When Jennifer tried to push him away, Ralph shoved her into the closet, breaking both of the doors.

Another incident involved Ralph getting the boy’s attention by throwing quarters at their sons, leaving imprints in their skin. Jennifer has told Ralph that she would divorce him for this, but never has, and she didn’t know why, although he had worked very hard over the last few months and curbed the violence considerably.

Jennifer was worried, however, that this is only a temporary reprieve. Given Ralph’s extensive history of violence, she was not sure he has fully dealt with his problems, and that the anger will come back.

All improvements and worries aside, Ralph’s children still suffer the after effects of what he has done. Kayla, the oldest of the group, said that Ralph had both thrown a phone book at her and beaten her with a muffin pan in the past few months when punishment would turn into child abuse. In fact, Kayla said that she was asked to stay home from school before so that people didn’t have to see her marks.

Ralph said that he got into lots of fights as a kid, lit his dresser on fire, and got into plenty of fights. These childhood experiences translated into his poor parenting and child abuse. He didn’t think that the boys were out of the ordinary – just boys being boys – but the lack of discipline and parenting let it get way out of control. When your boys are starting forest fires, I think that’s a safe thing to say.

Jennifer has even started to see Ralph’s reckless behavior reflected in their children, who she has seen smothering each other, much like what Ralph did to their daughter all those years ago.