It was a Sunday afternoon in 1988, when a chance encounter with Curly Thornton changed Raylynn’s life forever. She met him in a restaurant, where he told her that he was campaigning to be governor. A few days later, he contacted her and asked her to be a campaign manager, inviting her over for a campaign meeting. It sounded like a great opportunity to Raylynn, so she went over. When she got there, however, he was not politicking, but preaching. She was instantly wrapped up in his teachings, and had soon given up her home, car, job, and even ended up moving in with him. 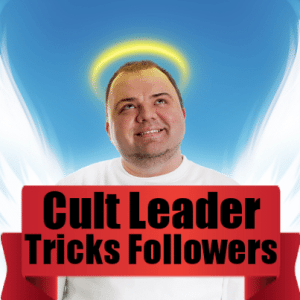 Curly Thornton was a brutal cult leader that deceived 100 or so people into giving their lives to him.

Soon after she moved in with him, though, Curly Thornton lost his bid for U.S. presidency, and his demeanor changed from the friendly one that drew everyone in, to a much darker one. Meetings had people put in the hot seat, where they were berated by everyone in the room, tearing them down. The abuse later became physical, when he would punch the men and hit them with bats.

Later, the women were beaten, as well. Her daughter, Sunny, would see her coming home with black eyes. He claimed that this was a disciplinary action to train them for the army of God. He led with intimidation and abuse.

Eventually, to make sense of the ruthless control he had commanded over his followers, Curly Thornton told them that he was Jesus. However, it looks like he wasn’t God’s son, as he died unceremoniously in 1999, and his ministry died along with him.

Dr. Phil: How Was Raylynn Deceived By Curly Thornton?

Raylynn was valedictorian of her class and very smart, so what made her so vulnerable to Curly Thornton’s preachings? She said that she was desperately looking for a relationship with God, and since Curly was telling stories of a vision of God cured him of his alcoholism struck home for Raylynn due to her alcoholic father, all of the pieces were in place for her to fall victim to his ploys.

Were there any signs that perhaps Carly Thornton was a fraud early on that Raylynn missed? For one, the two met at McDonald’s, hardly a hangout for God’s son. On top of this, the “Lord’s son” was asking Raylynn to write fraudulent checks, was addicted to alcohol and drugs, and abused her. Being a religious women before she met Curly, one would think Raylynn would draw some pretty sharp contrasts between Jesus and this false idol.