Dr. Oz: Kirstie Alley From Then Till Now

Dr. Oz invited Kirstie Alley on to his show this afternoon, but not before showing her progressive weight gain and weight loss throughout the years. He started with a picture of Alley looking very skinny, healthy and svelte as Dr. Oz put it. The picture was taken in 1997. He continued on to a photo from 2004 where Alley had ballooned to 200 pounds.

A photo of 2006 showed she has lost all the weight and was back to looking skinny again. She gets even thinner in 2007 and in 2009 she hit her all time high weight, looking very frumpy and overweight in the picture. His final picture, from 2011, showed Alley back to a smaller version of herself and back into a size 6 dress.

When Dr. Oz called her out from the backstage, you could tell she was confident and feeling good. Even Dr. Oz said she looked hot.

Dr. Oz: How Did Kirstie Alley Put on the Weight?

Alley told Dr. Oz she knew she was a hot mess but she wanted to be a mom. She wanted to play with her children, take them to fun places and do everything any other mother would want to do with their kids. She said this contributed to her weight gain, along with excessively baking and drinking up to 12 cans of grape soda a day. Alley said she had an amazing time with her and she got fat.

Dr. Oz asked Alley if she felt a lot of people could identify with her and Alley seemed to avoid the question a bit. She said she went through menopause at age 41, probably from being addicted to cocaine. Going through menopause Alley said she was very hormonal which did not help much with her weight gain. 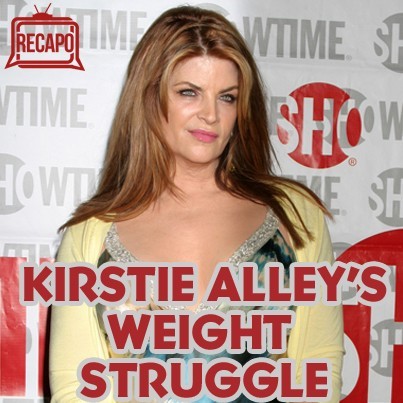 Kirstie Alley talks to Dr. Oz about losing weight, gaining it back and how she if getting her confidence back. (Featureflash / Shutterstock.com)

Dr. Oz asked if relationships were also a factor in the weight gain but Alley said probably not. Alley said she did not feel sexy at all, which led her to not pursue men at all. Although she said to Dr. Oz she didn’t think relationship with men made her larger, her answer seems to say she does.

Alley said when she gets mad at her children or her friends she goes straight to food. Specifically chicken fried steak and mashed potatoes with gravy. Those foods combined, depending on the amount eaten, averages around 700 calories alone!

Dr. Oz: Are Cocaine and Food Addictions the Same?

Dr. Oz asked Alley if she thought cocaine addiction and food addiction were the same and Alley said they were not. Alley said with cocaine she knew she was doing something terrible to her body, but with the food she felt confused. She was able to eat anything all her life and suddenly she was getting fat. She said she was very confused as to why she was gaining weight.

Alley said she told Oprah she would only go on the show with a bikini if no one took photos, not realizing someone could take a screen shot on a TV. The image leaked onto the internet and Alley said she really did not want that to happen. She was not happy how she looked in the photo. And although the paparazzi takes so many photos of her and never leaves her alone Alley said she doesn’t mind. Although Alley did say she minds when people fabricate stories about her weight.

I think she is looking great nowadays, especially today on the Dr. Oz show in her tight, slim black dress. What do you think? Leave us some comments in the comment box below. I’m curious how other people see her. Attractive or not?