Dr. Oz has been talking with Joan Rivers about her career, her life and the struggles she has gone through. Dr. Oz even made Joan Rivers shed a few tears while they talked about her husband committing suicide and the amount of pain it caused for her daughter Melissa Rivers. This truly was an uncensored interview with a woman who has been through a lot but always uses humor to make it through the worst of times.

Melissa said her favorite part about working with her mother on Fashion Police is that she gets to be her mother’s boss, even if it is just for a couple hours each week. Either way though, Joan never listens to her.

As for living with her mother, Melissa said the worst part about it is the living part. She said Joan has slowly taken over her home and even her own dogs spend more time with Joan than they do with her.

Dr. Oz asked Joan and Melissa Rivers to share with the audience each other’s worst habits. Melissa said her mother’s worst habit is eating junk food in the morning. She said Joan likes to eat M&M’s and Cool Whip every morning. She said Joan puts Cool Whip on everything, even pistachio muffins. She also added that her mother is known to have a glass of red wine in the morning on occasion as well.

Although Joan Rivers has some unusual bad habits, they don’t concern Dr. Oz as much as Melissa’s bad habit, smoking. Melissa told Dr. Oz she has cut back her smoking to around five to seven cigarettes a day, but of course Dr. Oz wants it to be at zero a day. He said he could give her a bunch of statistics but he knows it won’t work. Instead, he wanted to show Melissa what she was doing to her lungs.

He handed Joan and Melissa Rivers two pairs of purple gloves and gave them both an accurate visual of what Melissa is doing to her body. He showed her a blackened lung from a person who smoked their whole life which seemed to make Melissa think twice about her smoking habit. Dr. Oz even extended help to Melissa, saying he would personally help her to quit smoking, which she promised she would do for her mother and her son. 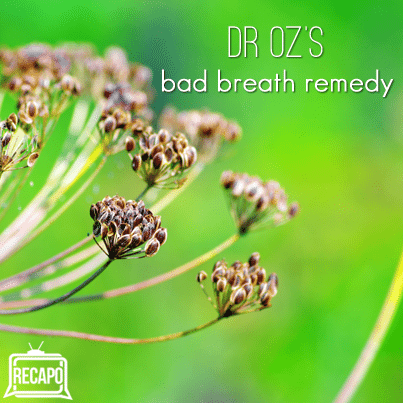 Dr. Oz talked with Melissa Rivers about why she wants her mother to stop getting cosmetic surgery and she also revealed Joan Rivers’ bad habits. (s_bukley / Shutterstock.com)

Dr. Oz knows Joan and Melissa Rivers never hold back on their show Fashion Police as they call out celebrities for their fashion fumbles, but today he wanted to focus on health mistakes made on the red carpet. Joan Rivers said the biggest health mistake she sees, or smells, on the red carpet is bad breath. She said with all the dieting going on during award season, after not eating for a few days most celebrities have really smelly breath.

Dr. Oz had an easy remedy for bad breath. He said eating a few whole fennel seeds right after a meal will give you fresh breath and as an added bonus, you will also comfort your belly by aiding in digestion.

Melissa Rivers said the number one health problem she sees on the red carpet are bunions. She said stars have some ugly feet and they know it. Dr. Oz pointed out that bunions can be genetic but they happen when a woman wears high heels. He suggested placing a small gel cushion between the first two toes on your foot. This relieves pressure caused by the bunion and can be worn with high heels.