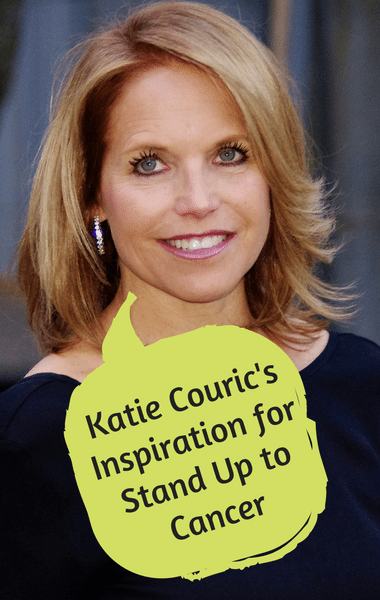 Katie Couric sat down with Dr Oz and shared her inspiration for co-founding Stand Up to Cancer and funding cancer research. (shankbone / Flickr)

Dr Oz had a blast visiting global news anchor Katie Couric as she returned to The Today Show. He was thrilled to welcome Katie to his own stage for the first time. Katie and Dr Oz joked about anchor Matt Lauer giving Katie a hard time upon her return for her inability to stick to her time queues.

Dr Oz then asked Katie about a picture she posted at 4 AM. She wanted to show everyone what she really looked like when she had to get up early to go in for work, and it certainly turned out to be a pretty funny picture! There’s no denying that Katie is one busy woman. In addition to her job with Today, Katie also does a political Podcast and a web series dedicated to quick and healthy meals. She also did a documentary for National Geographic.

Dr Oz was most curious about how Katie takes care of herself. She recently celebrated her 60th birthday and was thrilled to celebrate it instead of being embarrassed about her age. When Katie took Dr Oz’s Real Age Test, she scored a 54.6 which means she gained approximately 5.4 years of life compared to her chronological age. Essentially, that means she’s pretty healthy for her age! Katie joked that still, she was hoping that her RealAge would be 35-40. Fortunately, Katie feels younger than she is, so she’s happy with her results.

Dr Oz was curious as to how other people score at Katie’s age and it turns out that only 10% of the population would get the same results. Dr Oz explained that that’s such a big deal because the trend will continue. By the time Katie turns 70, her body will think she’s 60, and that’s what taking care of yourself is all about.

Katie admitted that she can be a bit lazy and undisciplined sometimes when it comes to self care. She explained that the key for her is to schedule some sort of physical activity so she has to do it. She’s also hoping to learn more about meditation and even plans on going on a meditation retreat with her husband. Dr Oz suggested that Katie put less pressure on herself to meditate for a set period of time because even just 60 seconds of meditation can make a big difference.

Dr Oz: Why Katie Couric Co-Founded Stand Up To Cancer

On a different note, Stand Up to Cancer is one of the most successful foundations, period. Katie actually co-founded the organization because her husband Jay died of colon cancer at the age of 42. He was diagnosed nine months prior to that and Katie described the experience as “harrowing” and “devastating.” Because of what she went through, she wanted to try to spare other families of having the same fate. She said she learned so much, driven by desperation.

She even underwent a live colonoscopy on the Today Show and colonoscopies increased 20%. Dr Oz called it “The Katie Couric Effect.” But Katie wanted to focus on more than just colon cancer, saying that one out of every two men and one out of every three women will be diagnosed with cancer in their lifetime. She started Stand Up to Cancer to “increase the pace of medical research.”

She helped establish Dream Teams which are basically people who are the top of their class for various cancers so they can collaborate instead of compete and move progress forward faster. Over $481 million have been pledged to scientists who, according to Katie, “desperately” need the money.