You may think you know Joan Rivers pretty well but Dr. Oz sat down with the comedian to have an uncensored conversation about her life, her career and the numerous struggles she has had along the way. This is truly Joan Rivers like you have never seen her before. She even shed a few tears while talking with Dr. Oz.

Joan Rivers always says whatever is on her mind because she believes if you laugh at yourself first, no one else can make a fool of you. She said it stems mostly from her insecurities, which Dr. Oz said he could not believe she has not been able to get over in all the years she has been in comedy. She told him her insecurities stem from the negative image she has of her body and now that she is getting older, that is starting to bother her as well. 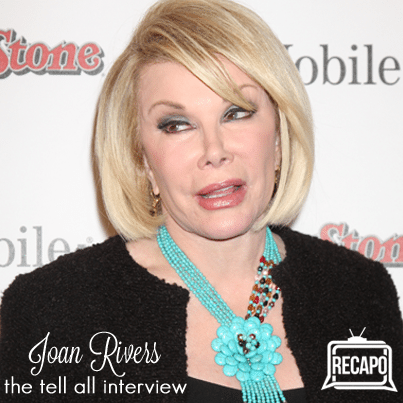 Dr. Oz talked with Joan Rivers about her bulimia, which she said was fabulous, her husband committing suicide and how many cosmetic surgeries she has had.

Joan Rivers told Dr. Oz she struggled with bulimia for years. She said it all started after her husband, Edgar, committed suicide. She remembered her doctor telling her it was the one thing she could control in her life. She had just been fired from Fox and her husband had committed suicide. Joan said the one thing she could control was the food she was throwing up. Surprisingly, Joan Rivers said she felt fabulous when she was bulimic. She said it made her feel full at the time and it gave her something to control in a life that seemed to be unraveling. She did tell Dr. Oz she is not bulimic anymore.

Dr. Oz took the conversation in a deeper, more serious direction when he asked Joan why she made the controversial movie about her husband’s suicide. Joan and Melissa Rivers starred in the movie as themselves and it was the first time anyone had dared to bring up such a personal topic.

Joan said the critics ripped her apart for doing a movie about suicide but she received bags of letters every day from people who wanted to thank her for making a movie about suicide. Through tears, Joan Rivers told Dr. Oz about the time, almost 21 years ago, when someone called her home and told 16-year-old Melissa her father had committed suicide. She told Dr. Oz it angered her and upset her that her daughter was the one that had to tell her, but also because of how devastating the suicide was for her daughter.

Joan said most people say they are sad when someone commits suicide, but she told Dr. Oz she was angry towards her husband for what he had done and what he left her to deal with. She said it was a truly difficult time for her family but they were able to make it through by using humor to lighten the situation.

There are two things Joan Rivers is known for: her comedy and the amount of plastic surgery she has undergone over the years. She told Dr. Oz her first surgery took place when she was 32-years-old and she has had around 16 procedures since then. Joan said there is pretty much no procedure she would not consider because she believes plastic surgery is about feeling confident in yourself.