Dr Oz introduced everyone to Roosh Valizadeh, the man who calls himself the “leader” of the fat shaming movement. Dr Oz is determined to not let bullies hide anymore. Roosh “Vorek”claims his goal is to “make it more acceptable to shame, bully, and humiliate fat women into thinness.” He’s even calling for a worldwide fat shaming movement, rallying his followers to take a picture every time they see a woman with a “bit of a muffin-top” and post the pictures to Twitter.

Dr Oz was joined by Roosh, who said his intent is a reaction to the fact that in the bast 30-40 years people in the U.S. have increased their size to the point that two-thirds of people are overweight. He thinks that fat shaming will reduce the health concerns and health problems that people face right now.

Dr Oz: Men Would Rather Die Than Date A Fat Girl? 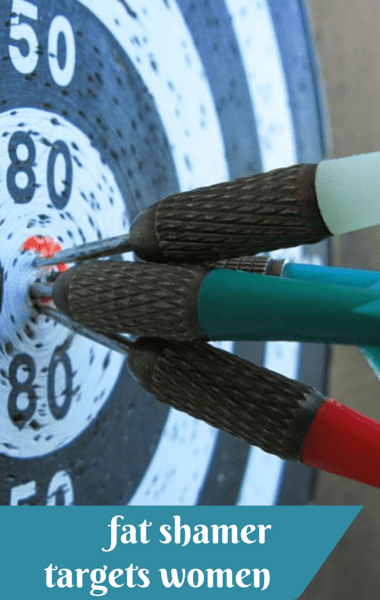 Dr Oz sat down with a notorious online fat shamer who believes embarrassing women will encourage them to lose weight and get healthy. (akire_yrko / flickr)

Dr Oz shared some of Roosh’s posts, starting with the comment that “men would rather die than sleep with a woman over 150 pounds.” Roosh said the men he’s met, who are thin, go to the gym three times a week, and have good jobs, don’t want to date a woman who is massively overweight. Dr Oz said he’s a healthy man and he loves women of all shapes and sizes. Roosh said Dr Oz has to say that because he has millions of viewers, whereas Roosh is speaking in a way that men do to each other in a locker room. Dr Oz said Roosh is in different locker rooms than him.

Dr Oz: Beauty On The Inside Argument

“Beauty on the inside… is just something ugly people and feminists say” is another one of Roosh’s quotes from his website. Roosh said he’s never had a weight problem and said that how someone is on the outside is indicative of how they are on the inside. He said if someone doesn’t have the self-control to exercise or watch how they eat, it’s a sign that there are problems on the inside. Dr Oz said, “We’re all messed up.”

If men come to Roosh wanting to increase their success in life, the first thing he tells them is to hit the gym. He said he’s encouraged thousands of men to eat right and workout. He said men respond to logic.

Roosh said the women in his life love him for who he is and the ideas that he push concern dating. He said he’s stating a fact that men like women who are thin. Dr Oz said, “I’m asking these questions because I’m trying to figure out why you’re so screwed up.”

Dr Oz found 50 papers that show fat shaming doesn’t work. He said when you fat shame people, they actually feel worse about themselves and their self-esteem drops, which causes them to eat more. What does work is making people realize how special they are. Roosh said the obesity epidemic is growing, and claims that what doctors with good intentions are trying to do isn’t working, so he thinks we need to try something else.

Roosh said he believes that embarrassing a woman and making her feel ashamed to look the way she does will encourage her to eat right. Dr Oz said he couldn’t find one single person who agreed with what Roosh was doing. So what made Roosh start doing what he’s doing? Roosh said every year he would have fewer options to date a thin, beautiful girl. “Every year women are getting larger and larger,” Roosh said. “It has to be stopped.”

Dr Oz said what angers him the most is that Roosh is asking people to post pictures of women, and Dr Oz pulled a picture from the internet of someone who called a random, innocent woman a “fat pig.” Roosh said we each have the right to share our thoughts and opinions.

Dr Oz said what keeps the globe spinning is morality and he believes that some pieces of Roosh’s brain are missing. What do you think? Do you agree with what Roosh is doing?