Dr. Oz said it took him over a year, but he finally did it. The entire cast of The Chew came on to the show. And for anyone not familiar with The Chew, it is a daytime talk show, jammed packed with lots of food and fun. The cast includes Top Chef winner Carla Hall, world renowned Italian food chef Mario Batali, Iron Chef winner Michael Symon, entertainment expert and gourmand Clinton Kelly and, of course, Dr. Oz’s daughter Daphne Oz. 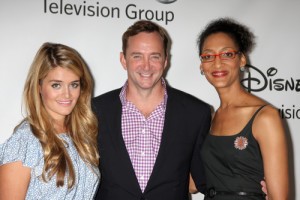 The Chew cast stops by the set of Dr. Oz to talk food and a hangover cure. (Helga Esteb / Shutterstock.com)

New York City recently banned the sale of any soda drinks larger than 16 ounces. Dr. Oz wanted to know how everyone else felt about. Mario said if we have laws about speeding, obviously it shows we can limit ourselves. And he added, how often do you need something bigger. He noted people still have the opportunity to buy three sodas, but many will not do that.

Clinton Kelly siad soda should come with a warning just like cigarettes do. Possibly a warning saying to much sugary drinks can cause diabetes. But Daphne said the real issue is making it easier for people to get healthy foods.

Dr. Oz said the food on The Chew can be unhealthy sometimes. He wanted to know why.

Dr. Oz brought food pairings with soda to the attention of the cast, many of who thought it was ridiculous to pair things with soda, to ask them what they would pair with soda.

Symon said you can not pair things with soda and he also went back to Dr. Oz’s comment about making unhealthy food to say they teach people to cook from scratch which is better than buying frozen food at the supermarket.

Mario said he would pair oysters with the french soda, champagne. Clinton said he used to eat two cheeseburgers and an orange soda to cure hangovers.

Symon also added, back on the cooking bad food topic, parents need to cook food from scratch with less salt, or use the salt as a flavor enhancer, just as it is meant to be used. Carla even chimed in and said salt is like a little bowl of compliments, because without them you are not getting any compliments.