Michelle Obama is a lunch lady? Not really, however, she is on a mission to reform the schools’ lunch programs by offering healthier alternatives to meals. She said that teaching kids about nutrition is our first step to controlling obesity. Dr Oz agreed and was attempting to teach children about nutrition with his Healthcorp initiative. This year, Healthcorp will change your outlook on eating healthy.  Plus, Obama spoke to Doctor Oz about the new Presidential Fitness Plan. 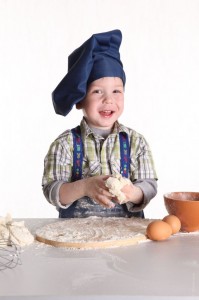 Michelle said this new lunch program is the first major change in 15 years. Most kids are getting 50% of their calories at schools so portion size and nutrition need to be right. They need to eat more fruits and veggies to remain healthy. Legislation for this plan was just passed so we should see an impact in schools this fall. Even before legislation, over 4000 schools have already adopted these changes, which proved that schools were on board. The legislation provided increased funding, which was something we haven’t seen in 30 years. .

Before Meal: Bean burrito and applesauce

After Meal: Turkey and cheese sandwich on whole grain bread and jicama. The difference was in the whole grain bread because it had more nutrients. Taylor, one of the students, tried the turkey sandwich and gave it the thumbs up. “It tastes good,” she said with her mouth full.  As far as I can tell though, it does not seem like most schools in the country are feeding kids jicama or healthy foods.  Do your kids have healthy choices at their local schools?

Taylor was asked if she had a question for the First Lady and she wanted to know if her kids watched television. Michelle stated that they do, but only for a limited amount of time per day (with a little more TV time on the weekends.) In fairness, Michelle asked Taylor if she watched TV and Taylor admitted that she did and a little too much. Taylor did add that she would cut down on her television viewing.