Dr. Oz and investigative reporter Michael Moss discussed Moss’ book Salt Sugar Fat, in which Moss reveals some of the food industry’s dirtiest secrets. Did you know the food industry created a bliss point for sugar to keep people coming back for more? Dr. Oz also looked at the similarities in brain scans from cocaine addicts and from people addicted to food.

Moss argued salt is the food industry’s “magical” ingredient because it is a problem solver for them. Salt can add shelf life to products, add crunch to numerous foods and give a “flavorburst” in the first bites of the food.

Moss was most concerned with the use of kosher though. He said more and more food companies are using kosher salt because it is larger, shaped differently and sticks to food much better than other types of salt. The part the food industry likes the most about kosher salt is the hollow inside which makes more room for saliva to make contact and in turn sends a powerful message to the brain to eat more of that food. Dr. Oz said that we need to turn this off because it is causing us to become addicted to the ingredients in unhealthy processed foods.

Dr Oz: What Is Warmed-Over Flavor? 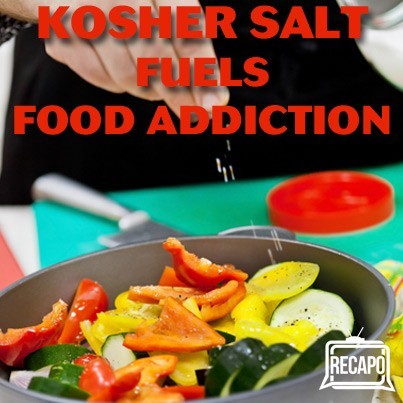 Dr. Oz learned how food companies use kosher salt to fuel addiction, how salt is added to warmed-over flavor for taste and the correlation between mouthfeel and fat.

Moss continued by explaining the concept of warmed-over flavor (WOF), which describes how food tastes that has been cooked and then needs to be cooked again after being purchased. The flavor is usually not good when reheating products, so the food companies use high amounts of salt to mask the flavor, in turn making the product taste better and leaving the consumer wanting more.

Moss explained to Dr. Oz’s audience that fat has twice the calories of sugar and this causes your brain to react differently when it encounters either one. What is most interesting though is if you add sugar to a fatty food, a person’s brain will block out everything and tell the person to just keep consuming more and more without any regard for fat or calories. Moss added this is exactly why we have such a huge obesity problem in our country right now.

Dr Oz: What Is Mouthfeel?

Dr. Oz told the audience the one part of the investigation that most fascinated him was something known as “mouthfeel,” which is the theory that fat somehow controls how your mouth sees the world. Mouthfeel is literally the taste of fat in your mouth, and when added to sugary and salty foods it is the Holy Grail of food, a concoction that will have you coming back time and time again.

Dr. Oz reached out and received a response from the Grocery Manufacturers Association. They wrote back to Dr. Oz saying they believed Michael Moss misrepresented food and beverage companies because their commitment is to provide consumers with the products they need to live a healthy lifestyle.

Moss disagreed saying they are not doing enough to provide healthy foods and the obesity problem in America is an example of that. If you are still skeptical, Moss said to read his book because you will find several in-depth interviews with company insiders who believe the very same thing.