Dr Oz wanted to talk to all those women who desperately want to lose weight, but feel like the scale just won’t move. He welcomed to the show Haylie Pomroy to contribute to the segment and explain why the scale gets stuck. She said as women we tend to focus on losing weight, rather than why the scale is stuck “and what to eat about it.” She said in her clinic she looks at things like inflammation, digestion, and hormones to find foods that can “burn through those plateaus.”

Haylie said she had what is called The Burn, which is a book and a 3-, 5-, or 10-day plan that she actually uses in her clinic. She uses smoothies, soups, and teas to burn through the barriers and achieve success. 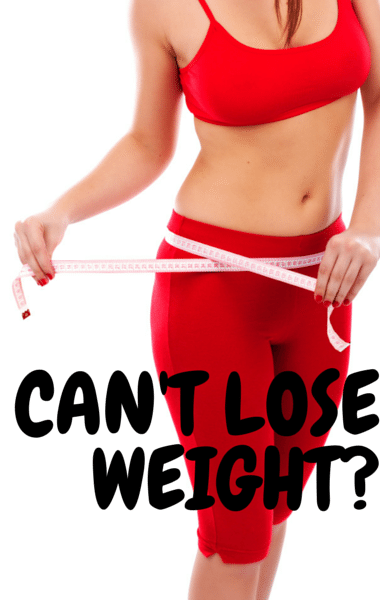 Dr Oz explained three possible reasons you’ve been unable to lose weight and what you can do to get the scale moving again. (Jinga / Shutterstock.com)

So how do you know what is causing your scale to refuse to budge? Is it inflammation? It could be if your face is puffy, you struggle to get your rings off at night, and fat settles around your lower back, muffin-top style. Dr Oz explained that you could be dealing with inflammation because of the foods you’re eating.

When you ingest inflammatory foods, your body sends out a distress signal telling your body to stop burning fat, which could cause your face to puff up, making your cheekbones disappear.

Kendra shared that she thinks inflammation is to blame for her stuck scale. Haylie said they wanted to use specific foods in a certain plan to fix the why: foods like raw walnut, cranberry seed, or a soup made with daikon radish. For inflammation, choose diuretic, anti-inflammatory foods. You should eat the daikon radish soup twice a day, one cup before both lunch and dinner. Haylie said she makes a big batch of the soup and then freezes it.

Haylie explained that it’s part of her three-day plan that works for micro-repair.

The next possible reason the scale is stuck is because of digestion. If you get heartburn or feel bloated after meals, and if you get skin flare ups or have a white coating on your tongue, you could be dealing with digestion. Dr Oz explained that you’re digesting too slowly, which in turn slows down or stops the production of enzymes that break down nutrients from your food. You body stores the fat rather than burning it.

Jenny’s scale was stuck at 185 pounds, and she followed Haylie’s plan until she lost 40 pounds in six months. She shared that she liked the wholesome ingredients and fueling her body in the right way. Haylie explained that people with digestion issues, it’s more about what they absorb rather than what they actually eat. Haylie said they use targeted food smoothies to help aid in proper digestion. A smoothie made with apples, lemons, and cucumbers can really get digestion going. You can also add things like pumpkin seeds, basil, and chia seeds to the smoothie as well.

The tartness of the apple really helps to stimulate digestion. Add one teaspoon of chia to the smoothie and drink it within 30 minutes of waking up for optimal results. High fiber foods are great for those with digestion issues, so again, making a soup is a great option. Flax seed, ginger, and red cabbage make a great digestive aiding soup.

The final reason your scale could be stuck has to do with hormones. If your hair and skin is dry to the point of cracking and fat is showing up in places you’ve never had it before, or if you’re eating a lot of sugar and carbohydrates only to crash later, your hormones could be to blame.

One woman shared that she had a baby 15 months ago and for the last year her scale hasn’t moved. Haylie said hormone based weight loss resistance happens to all kinds of women. She said sometimes the body resets its metabolism at a slower rate. She uses ten days of micro-repair to nurture the hormones, using healthy fats like coconut oil. The key is to couple it with a citrus like grapefruit. Grapefruit supports the liver so that you can break down the fat.

You can also make a soup out of darker yams and a tea out of dandelion root. Haylie explained that there’s a smoothie, a soup, and a tea for every plan, and for this specific plan she suggested drinking dandelion root tea three times a day. The tea helps the liver as well, which flushes out what’s not good for us.