Dr Oz: Why You Should Eat Bison

Why in the world would Dr Oz promote eating a succulent, juicy hamburger if he spends the majority of his time promoting a healthy lifestyle? It turns out, you can enjoy a mouth-watering burger without the guilt. How? By using bison meat! According to Dr Oz, bison is the healthy meat you should be eating but likely aren’t. Food journalist Larry Olmstead claims our country is “on the verge of a bison boom” and set out to investigate.

As Larry explained, we’re living in a time when everyone is looking for healthier protein. Bison is the closest-tasting meat to beef, but is healthy and raised naturally. The largest bison rancher in the world in Ted Turner and he’s committed to conserving the American bison, which was near extinction just a decade ago. Ted knew that if people tried bison, as long as it was prepared properly, they would like it. So Ted teamed up with restaurateur George McKerrow Jr and opened Ted’s Montana Grill where bison is front and center on the menu. At Ted’s they serve more bison than at any other restaurant in the world.

George knows that bison is good and good for you because it’s rich in omega-3 fatty acids. At Ted’s 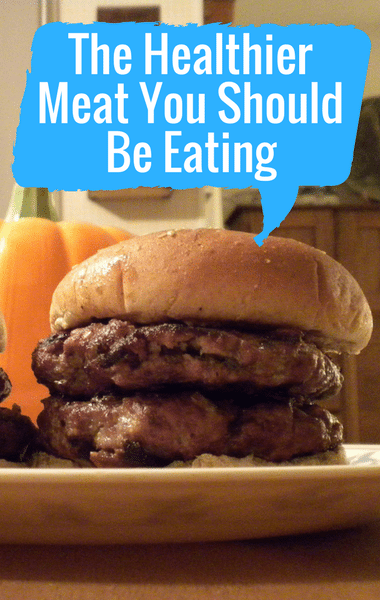 Have you tried a bison burger yet? If not, it’s about time you do because it tastes even better than meat and is better for you! ([email protected] / Flickr)

fresh bison meat is brought in and cut into steaks or ground into burgers 2-3 times daily right there on the premises. Ted’s serves more than 20 iconic bison dishes, each of which are delicious. It’s no surprise that bison is becoming so popular that right now in America demand is 5-times supply.

Larry Olmsted, author of “Real Food Fake Food,” admitted he won’t eat something just because it’s healthier. But for him, if he sees a bison burger on a menu full of beef, he’ll order it every time because it allows him to get his burger fix in a way that still tastes delicious but is better for him.

Dr Oz put bison and beef head-to-head, using data for a typical beef burger versus a typical bison burger. A beef burger is typically about 240 calories while a bison burger is 179 calories. Beef burgers have 6 grams of saturated fat each, while bison has 3.5 grams. Bison is even lower in fat and calories than salmon and chicken! Also, typically when you see buffalo on a restaurant menu, unless you’re talking about chicken wings, it’s likely just a slang term for bison and is the same thing.