There’s been a big paradigm shift in cancer that has the government, medical field, and tech titans buzzing. Researchers have found a way to “hack” cancer through a breakthrough known as immunotherapy. Immunotherapy is essentially harnessing your immune system’s ability to become a smarter cancer-fighting machine to destroy cancer cells.

Immunotherapy is transforming the way we’re treating cancer and changing the courses of people’s lives all across the country. It’s being hailed as a game-changer as hundreds of new clinical trials are underway, thanks to billions of investment dollars from drug companies. Even patients once considered terminal are seeing incredible results. The potential benefits of immunotherapy are still seemingly unknown for the majority of cancer patients. Still, many doctors don’t know enough about the treatment, which means patients could be left in the dark about a potentially life-saving treatment. 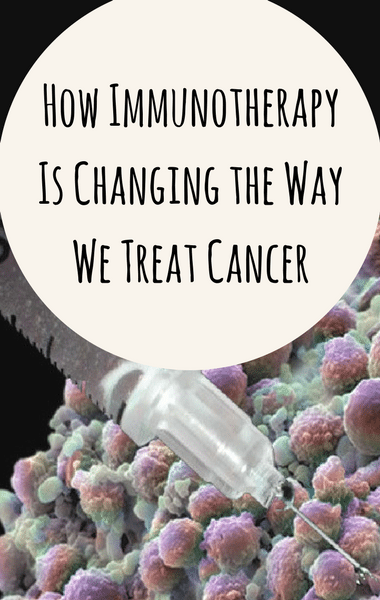 Dr Oz discussed immunotherapy and how it is changing the way doctors are treating cancer, even of the terminal kind. (ajc1 / Flickr)

For one patient named Stephanie, she was fortunate enough to discover immunotherapy before it was too late. At the age of 22 she was diagnosed with stage two colon cancer. Eleven months later it became stage four. Not only did Stephanie’s diagnosis come early in life, but it appeared to be terminal.

Stephanie explained that her doctors tried everything they could, but nothing seemed to be working. Her tumor became inoperable and her doctors told her they had run out of options. Fortunately, there was one option left. For some patients, immunotherapy can be a total game changer, especially for those patients for whom everything else has failed.

Stephanie explained that she first heard about immunotherapy during a consolation with her doctor, but he mentioned it somewhat as an after-thought. She left that meeting feeling like immunotherapy was the only thing she had left to hold onto. Stephanie’s little sister started researching immunotherapy trials online until she found one that Stephanie qualified for. The doctor ended up calling her and told her to “get over here” because they were having “tremendous” success with patients just like Stephanie. Stephanie saw it as her last chance.

For Stephanie, it paid off. After just three months, her tumor shrank by two-thirds. As of February of 2016, she was considered cancer-free.

For patients like Denise, immunotherapy can be paired with chemotherapy as a “one-two punch” to fight cancer. Denise was 41 when she was diagnosed with early stage one breast cancer. There was never a doubt in her mind that she wasn’t going to beat it, given she caught it early. Even though she caught it early, Denise had an aggressive form of cancer with a high rate of occurrence. That’s why Denise’s doctor advocated to include immunotherapy in her treatment. He explained that the drugs will help to ensure that Denise’s cancer doesn’t come back, given that it’s assumed Denise is cancer-free.

According to Dr Oz’s recent health report, 63% of women believe they will die from cancer, while only about 40% will actually even get cancer in their lifetime. Dr Gary Schwartz explained that cancer is no longer a death sentence and fear is being replaced with hope. As Dr Oz explained, immunotherapy helps the body identify cancer cells, even the best-disguised ones, and kill them off. Everybody has a cancer in their body but our immune system usually hunts it down and kills it.

As for what cancers can be treated with immunotherapy, Dr Schwartz named melanoma, lung cancer, colon cancer, head and neck cancer, lymphoma, and stomach cancer. Researchers are now talking cures, when a cure was never even thought of as a possibility years before.

Precision medicine is another term Dr Oz wants people to understand, as Dr Schwartz explained that every patient has the ability to have the DNA of their cancer sequenced. Once the gene is found, there are drugs that can block those genes and turn them off, seemingly turning off cancer to prevent it from growing. Every cancer patient has that ability, according to Dr Schwartz. It’s also less toxic because it’s more specific, Dr Oz claimed. It means patients can have the least amount of chemo necessary to still beat their cancer.

That same idea works with vaccines, as well as waking up the immune system to treat cancer and prevent it before it even starts.