After sharing Ovarian Cancer Warning Signs & Screening Tests, Dr Oz answered Ovarian Cancer Questions from his audience. Next, he invited Dr William Li to talk about how an Anti Ovarian Cancer Diet can lower a woman’s risk of developing the disease by a whopping 75%. Among the menu items recommended were Sea Bass, Endive, and Red Onions. Find out how they work.

Dr Li said that patients often ask about their diets toward the end of an appointment. Dr Li said he was inspired to explore the connection between food and cancer risk after two of his uncles died from Cancer. Food can act like medicine in the body, and research finds that diet is one aspect of health that can be controlled, unlike risk factors such as your family history. 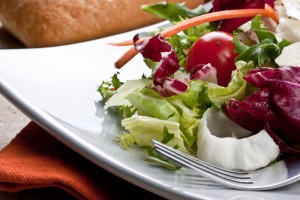 Salad ingredients such as Endive and Red Onion are part of the Dr Oz Anti Ovarian Cancer Diet.

The first item on the list in the Dr Oz Anti-Ovarian Cancer Diet is Endive, which is a vegetable you could be adding to your favorite salad. It’s a member of the Chicory family and it looks like a white or yellow tulip that hasn’t bloomed yet.

Endive has been shown in studies to lower the risk of Ovarian Cancer by up to 75%, because it naturally contains a chemical that kills Ovarian Cancer cells. It also acts to starve any existing cells and prevent them from growing. The only catch is that you have to eat Endive raw to get its benefits. Dr Li recommended adding 1/2 cup of Endive to your salad twice a week.

Next on the list was Sea Bass. A study of 18,000 citizens in northern Italy concluded that a diet including fish, which are full of Omega-3 Fatty Acids, can lower a patient’s risk for Ovarian Cancer by 30%. He suggested fish such as Branzino or Mediterranean Sea Bass.

The recommendation here is six ounces of Sea Bass, two to three times per week. For reference, one six-ounce serving is roughly the size of the palm of your hand.

Last on Dr William Li’s list was Red Onion, which works in three different ways to fight Ovarian Cancer. Italian and Swiss studies both found that Red Onion lowers Ovarian Cancer risk by 73%. The reason that Red Onion is more powerful and effective than White Onion or Yellow Onion is that it has 60% more cancer fighting ingredients than its onion relatives.

There’s a catch here too, though. Don’t boil the onions, because that cuts their potency by more than half, to 30%. Just saute them in a pan with some oil. Dr Li suggested incorporating 1/2 cup of Red Onion into your daily diet. Though this might seem like a lot, you can add it to salad or use it to spice up your entree at dinner.