Heather, the mother of two young girls, may be one the funniest oversharers on the internet. Her kids sent a video to Dr. Oz saying their mother overshares everything, even embarrasing things her children do, to the thousands of followers she has spread across her Twitter, Facebook and her own blog.

Heather said her philosphy for the oversharing is it is better to laugh about it, than it is to drink about it. She also said the one thing she doesnt share with people are intimite deatils about her husband but immidiatly said everyone who knows me knows I am a very happy woman.

Thats kind of like telling us intimate details, right?

Dr Oz: Mom Pees Her Pants in the Bathroom 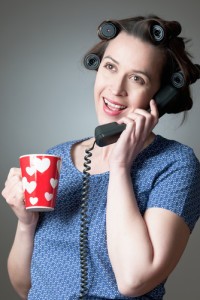 Dr. Oz talks to two different women who share every part of their lives, and explores oversharing health benefits.

Dr. Oz told her looked through her tweets and noticed a pattern. Heather is always tweeting about her bladder. One tweet read:

‘This is one of those mornings I would have liked to try depends. I could have slept ten more hours.’

She said she didn’t regret putting it on Twitter because it is something all women think about. Heather also told Dr. Oz she blogged about getting her feet dirty and walking into the shower, full clothed to wash them off. Because of her routine everyday, which included peeing in the shower each morning, she peed her pants when she was in there.

A little too much oversharing for me.

Heather told Dr. Oz that life was not like The Cosby Show. She wants everyone to know it is OK to discuss whatever you want. Even peeing yourself apparently.

Dr. Oz asked her about a recent photo of her daughter on her blog. At first glance it looked like a girl with a pony. But she told Dr. Oz it was not just a normal ponytail band. Her daughter had accidentally used one of her leopard print thongs as a ponytail band. Of course Heather had to put it on her blog for the world to see.

Dr. Oz said Heather was literally the biggest oversharer in the whole state of Oklahoma. To prove his point he tracked down some her friends and family. One friend said she knows Heather had a very painful kidney stone removed, even though she wasn’t there to witness it. Dr. Oz also tracked down her hairdresser who said Heather once told her about her child’s bladder problems and proceeded to show her a picture of her daughters poop.

She said she doesn’t mind though. The internet is a big part of her life and she likes to share everything with everyone.

The Domestic Diva, or Susan as her family calls her, has over 50,000 friends on Facebook alone. She likes to post lots of crazy videos on her Facebook, of her doing some really strange things, like vacuuming in a leotard, rolling skating while she water her plants and using the laundry basket as a weight.

She is one strange lady. What did you think about her? Let me know in the comment section below.

Susan said she loves to laugh. She added that motherhood is hard and if she doesnt’ keep laughing, she might end up crying. Susan also said she loves to make people laugh and she doesn’t care if people have to laugh at her for the laughter to get started.

But it has backfired on her once. Her child went to school one day and told another child his mother makes movies for the internet. Susan reiterated that she only makes the funny videos on her Facebook.

Susan didn’t let the little incident sway her though. She recently tweeted this:

She said she is comfortable in her body and other women should feel comfortable as well. Dr. Oz praised the women for bringing communities together and said if this is the best way to deal with personal problems, go for it. It is better than drinking or depression.