Dr Oz: How Can Alzheimer’s Be Prevented?

The cure to Alzheimer’s has yet to be found but one man says he can prevent Alzheimer’s from ever happening. Dr. Neal Barnard revealed to Dr. Oz that he has a three step plan that will help you protect your brain and live a longer, more productive life.

Dr Oz: Can You Prevent Alzheimer’s?

Dr. Oz explained that new research has found three specific minerals in the brains of all people with Alzheimer’s and eating meat, fish and dairy could be putting you at greater risk for the disease. But Dr. Neal Barnard said there is a way to prevent Alzheimer’s, an approach some have been calling radical because of the absence of drugs. Dr. Barnard explained the answer lies entirely in your diet.

Dr. Barnard explained to Dr. Oz why he thinks the cause of Alzheimer’s is because of metals, like iron, copper and zinc, the three metals found in the brains of all people with Alzheimer’s. While all three are essential to the body’s health, a excess amount of the metals can cause a problem and lead to Alzheimer’s. 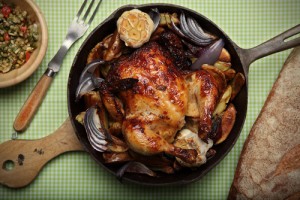 Dr. Neal Barnard revealed an excess amount of iron, zinc and copper can cause Alzheimer’s along with a fish, meat and dairy diet cooked in iron skillets.

So where is this extra metal coming from? Dr. Barnard said our food, our cookware, like a cast iron skillet, and our vitamins. If the metals build up too much they begin forming free radicals which attack the brain cells.

Dr. Barnard said using a copper or cast iron pan for cooking can lead to high levels of minerals in your brain, which he believes will lead to Alzheimer’s when the levels get too high. Remember when Dr. Oz said cooking with a cast iron skillet is great because it adds more iron to your diet? Dr. Barnard went on to explain there are certain foods that could also be putting you at higher risk for developing Alzheimer’s.

Meat – Meat is a good source of iron but when you eat too much meat, you get far too much iron. The saturated fats in meat are also bad for the brain and the heart.

Dairy Products – Dairy products are the highest source of saturated fats in our diet, which again is unhealthy for the heart and the brain.

Fish – Dr. Barnard said fish is a huge problem, especially lobster, because they contain high amounts of certain metals. He said these fish are living in the “human sewer” where they pick up a number of toxins that you in turn digest. He also revealed that fish is not the best source of Omega-3 fatty acids, something Dr. Oz has been recommending as a way to stay healthy and prevent Alzheimer’s.

Dr. Barnard said he grew up eating a lot of meat and fish but he has since stopped eating fish because he believes there are better foods out there that do not contain the bad fats and extra metals that fish does. Dr. Barnard also explained that supplements are great for your health but you do not need supplements with added iron, zinc or copper because you get enough of them in your diet.