Have you ever had back, neck or joint pain? Dr. Oz previously went over his solution to easing the pain in those areas with some great remedies that involve no medications. Can you believe there is an exercise to get rid of back pain? Keep reading to find out how one treatment for back pain could be causing more harm than good for many people.

Epidural Steroid Injections Are Dangerous and Not FDA-Approved

If you have ever experienced back pain then you know how bad it hurts and you know you will do almost anything to make it stop hurting. While there are a number of treatments for back pain, Dr. Oz said one in particular concerns him.

Epidural steroid injections are shots that are injected into a very vulnerable area of the spine. While many say it is safe, some people are saying it is far too dangerous. Elisabeth Leamy is an investigative reporter who thinks the procedure may have too many downsides to be safe. 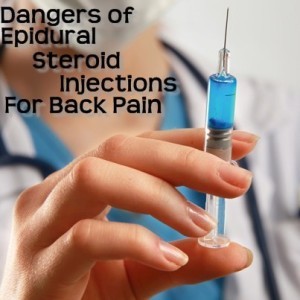 Dr. Oz went over his concerns for epidural steroid injections being used to treat pain but also spoke about how he would suggest it for a pinched nerve.

Leamy spent several weeks investigating the shots and told Dr. Oz regardless of whether a doctor is cutting into your back or injecting steroids into your spine, that area of the body is very sensitive and people need to be aware of the risk they are putting themselves in. Even though steroid injections are very common procedures for back pain, Dr. Oz said they have many downsides.

Dr. Janna Friedly agrees with Leamy that the steroid injections are a risky procedure for treating back pain. She said it is even more dangerous if the doctor is not properly trained and does not provide the patient with proper treatment. Dr. Friedly told Dr. Oz patients who have the procedure done will feel immediate relief but many of those patients do not see long-term benefits, with the exception of those who have a pinched nerve.

Dr. Paul Lynch has performed over 5,000 epidural steroid treatments and he argues they are safe and effective in treating back pain in his patients. He said he always makes sure to discuss the risks of the procedure with his patients and explains to them the other way to treat the back pain is giving the patient powerful opiates which cause death in one in every 500 people.

He told Dr. Oz he believes the epidural steroid injections are worth the risk of paralysis if it can alleviate the person’s pain. He also believes if the shots can only offer relief for two to three months, that is enough time for the patient to change their diet and exercise plans and find ways to strengthen their muscles to prevent pain in the future.

Elisabeth Leamy had three tips she wanted everyone considering epidural steroid injections to read before committing to the shots:

Dr. Oz agreed with Leamy’s guidelines and he also believes the shots are great for people who have pain that radiates down their legs. However, he said he was still concerned with the risks involved and encouraged everyone to research the procedure before committing to the treatment.