Dr Oz did a segment on Pee & Poop.  Then he brought up audience member, Charla, who stated that she didn’t go as often as she needed to and even a couple of times per week, she didn’t go at all. When Dr Oz asked what foods she enjoyed, Charla stated that she loved pastas, and in the mornings, she ate bagels and toast.

Doctor Oz asked Charla to put on the gloves. He pulled the blue sheet and revealed rolled up guts. (I know, disgusting, right? Well, it gets better.) 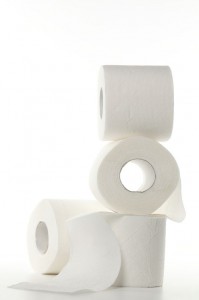 Dr Oz had Charla hold the rectum portion while he unraveled the guts. (See, I told you.) While he unraveled, he indicated where the stomach, the small intestine, the colon and the appendix were. Dr Oz says that foods had a long way to travel. Constipation happened when the intestines attempted to squeeze the toothpaste looking material out and it went nowhere.

To remedy the situation, include more fiber for ruffage. Dr Oz suggested eating whole grain breads, pastas and pizzas. Make it simple by purchasing these products frozen in grocery stores.

Maryanne, another audience member, stated that she took medications that made her constipated. The remedy for constipation of meds included peppermint herbal tea. This tea will not keep you up at night and soothes the stomach, allowing you to go much more readily. Maryanne tasted the tea and stated it was delish. (Not a big fan of tea, but it really does help.)

Lisa, another audience member stated that she had diarrhea, especially in the mornings. Lisa wanted to know what caused this. Dr Oz asked her if she used artificial sweeteners and she said she did. (Bingo!) Dr Oz state that artificial sweeteners was one of the biggest causes of diarrhea because they caused the body to make runny stool.