On March 22 2013, CBS This Morning gave us headlines about Lululemon’s yoga pants recall and super caffeinated coffee. We learned about the new healthy moves of McDonald’s and Burger King. 60 Minutes previewed their interview with Russian all-girl protest band, Pussy Riot. Then, Ron White demonstrated his memory skills by memorizing 2,190 names of fallen soldiers.

President Obama is heading to Amman to talk about stabilizing the government. They are in financial trouble after opening their borders to hundreds of thousands of Syrian refugees. A devastating shooting at Quantico Marine Base left a man and woman dead. Their shooter committed suicide. Yoko Ono is using Twitter to sound off about gun control and violence. The Super Bowl Blackout was found to be caused by faulty electrics. A French man tried to impersonate a pilot and was arrested. 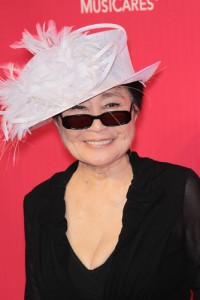 On March 22 2013, CBS This Morning reported that Yoko Ono tweeted for stronger gun control and peace in the U.S. (s_bukley / Shutterstock.com)

McDonalds is switching their traditional egg for egg whites, only losing about 50 calories and essential nutrients. New Jersey Governor Chris Christie answered questions from kids at a newly reopened school. The Mayo Clinic warns that people that thrash and kick in their sleep are at a higher risk for dementia.

Russian all-girl protest band, Pussy Riot, staged a protest at a Russian mosque in 2012. Two members were sent to jail and two others are now in hiding. 60 Minutes has an interview with the drummer. Then, the real estate market is going back up for the first time in several years. This will create new jobs and better opportunities for families.

Two-time National Memory champion Ron White memorized 2,190 names and ranks of fallen soldiers. A young boy was brought up on stage at a Bruce Springsteen concert and got to perform.