CBS Sunday Morning talked to drag racing’s first family, the Force family. They talked to patriarch John Force, a funny car driver who regularly races cars that can go from zero to over 300 miles an hour in just four seconds and have 8,00o horsepower.

At 65, John Force is still a force to be reckoned with in the sport. He’s won 16 funny car championships, which is more than any other drag racer in history.

“My office is right in the seat of the car and once I get there, an old guy like me gets young again. This fire suit makes me superman,” John Force said. 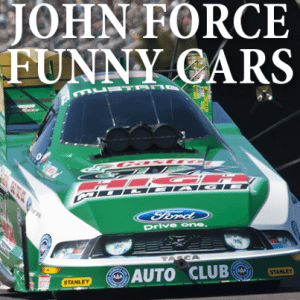 CBS Sunday Morning talked to funny car driver John Force and his daughters Courtney, Ashley, and Brittany Force about funny car driving and what draws them to the sport and how it brings them together as a family. (Action Sports Photography / Shutterstock.com)

John Force said that he knows he probably should have quit racing 20 years ago, but he loves it too much to stop. John Force showed off his first-ever funny car, which had no protection. It was basically a seat in an empty cabin.

But the thing that means the most to him is his daughters. His three daughters, Courtney, Ashley, and Brittany Force, are also race car drivers. Courtney Force turned heads when she appeared on the cover of the ESPN body issue unclothed and she also recently broke the record for the most all-time funny car wins by a woman. The record she broke was set by her older sister Ashley.

A race car driver’s life is on the road and so he wasn’t around a lot early on in the girls’ lives because of work. John Force tearfully told a story when he came home after being gone for a long while. He saw one of his daughters singing, but he didn’t recognize her until he heard her voice.

Now, John Force doesn’t have to miss anything, because his daughters are right there with him, racing him. In the video package, Sunday Morning showed his daughters giving him a haircut before a race.

A little while later, they all raced against each other in a drag race. John Force said he gets so into the race, he forgets who he’s racing against. He said it’s important to think of the other people in the race as “monsters”, even when those people are his daughters.

John Force was once in a bad crash where the car broke in half. He had no protection, with his arms and legs hanging out, going 320 miles an hour. Ashley was at the track. She said there was debris everywhere and she didn’t know where to look for him.

Courtney and Brittany were at home. They said they saw on the TV that John Force had been airlifted to a hospital. It took months of surgeries and skin grafts to put him back together. Since then, John Force has been spending more time as a grandfather and father. trying to be there for his family.

But slowing down isn’t in his DNA. John Force loves racing and he’s still going out there every day, giving it his best.