Prison time is not something anyone looks forward to in life. But Mandatory Minimum Sentencing can add a complicated wrinkle to the situation, as Erin Moriarty found out in a report for CBS Sunday Morning.

The story of 59-year-old Lee Wollard will probably resonate with many parents. Whether or not you think he went too far, the question in this case is whether the punishment fits the crime.

Six years ago, he was a husband and father of two with a Master’s degree and a job at Seaworld. His youngest daughter, Sarah, began dating a 17-year-old boy who had no place to live.

Lee and his wife, Sandy, said the arrangement started out well. But soon, his behavior changed. He would take their daughter out late at night, or disappearing for days at a time. She was only 16 years old. 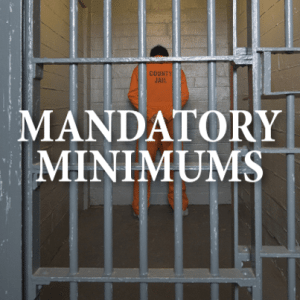 Mandatory Minimum Sentencing was intended to be fair, but CBS Sunday Morning illustrated that sometimes the arbitrary punishment does not fit the crime. (bikeriderlondon / Shutterstock.com)

Nothing the parents did to intervene seemed to work. He ignored their requests that he leave. But it forced a confrontation on May 14, 2008, when Lee awoke from a nap to the sounds of his daughter and the boyfriend fighting

He heard uncharacteristic cries for help, which propelled Lee into action. He loaded his .357 and went to see what was going on. The boyfriend allegedly lunged at him and punched a hole in the wall.

Lee fired a warning shot into the wall, and told the young man “the next’ one’s between your eyes.” Sandy said he rushed out the door, but that was far from the end of the story. Lee was charged with shooting into a building with a firearm, aggravated assault, and child endangerment. When a jury convicted him on all counts, Judge Ronald Jacobsen sentenced him to 20 years in Florida state prison, the mandatory minimum.

Lee Wollard was a first offended, and no one was injured in the shooting. But Florida’s mandatory minimum sentencing laws meant the judge was bound to the sentence, even though he spoke out against it to Lee.

Wollard is far from alone, as thousands of similar cases abound throughout the country. Many are drug charges, and there is debate about the balance between judges, legislators, and prosecutors. Steven Jansen of the Association of Prosecuting Attorneys said this is a useful tactic for negotiating a plea bargain and achieving fairer sentences.

Erin Moriarty questioned whether this is far, but Jansen countered that justice is blind. “You should receive equal sentence just as anybody else that committed the same crime,” he said.

Mandatory Minimums became popular in the 1980s during the war on drugs, which swept up dealers and users. Julie Stewart, founder of Families Against Mandatory Minimums, thinks it is unfair that judges cannot use their discretion.

Another example is Weldon An’gelos, who was sentenced in 2004 to 55 years in prison. His crime was selling $350 in marijuana to undercover police officers, who also found a firearm in his possession.

Young Jacob Lavoro, a 19-year-old from Texas, could spend 20 years in prison because he was busted with hash brownies. Stewart said that people should be punished for committing crimes, and there should be consequences, but she believes the power should rest with the judge in each case.

One consequence of mandatory minimums is prison overcrowding. Drug trafficking sentences have more than doubled in length since 1980, for example. Even Jansen admits that sometimes innocent people choose not to take a plea and wind up wrongfully convicted.

Wollard had the chance to take a plea bargain, but he chose not to take it, believing that he did nothing wrong. His wife pointed out that someone could kill another person under Florida’s Stand Your Ground law and get away with it, but a warning shot could land you in prison for 20 years.

The Polk County State’s Attorney declined to comment for the Sunday Morning story, but there are changes in the works at the federal level when it comes to judges’ discretion. Also, Florida has passed a law exempting warning shots from these sentences, too late to help the Wollard family.

Wollard has asked the Florida governor for clemency, and that request is supported by the former boyfriend of his daughter. If this is not granted, Wollard will remain behind bars until July 2028, at the age of 73.

However, he said he has no regrets about protecting his family. “It’s a bargain. I’ve got three family members…and they’re alive,” he said.