The memorial is designed to honor the people wounded in war. It’s for disabled veterans of all wars, of whom an estimated 3 million are alive today. The memorial focuses on the stories of trauma of injury, the healing process, and the rediscovery of purpose. 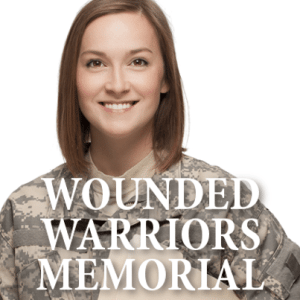 CBS Sunday Morning had a special report on the American Veterans Disabled For Life Memorial and talked to some of the veterans honored in the memorial. (Straight 8 Photography / Shutterstock.com)

It tells the story of soldiers like Bob Dole, who came back from his World War II wounds to become a United States Senator and run for president.

It’s also the story of disabled veterans that aren’t famous. Joe Bakani was one of them. His picture was up there right alongside Bob Dole’s at the memorial. He said he always saw himself as a normal Average Joe. Joe Bakani was shot in the pelvis by a sniper in Iraq in 2007.

The picture of him in the memorial was him in his wheelchair at his Purple Heart ceremony. Bakani is now a junior at Columbia University. He said after being wounded, he wanted to be the best he can be, especially after seeing his friends sacrifices in the war.

Sunday Morning: Harold Russell The Best Years of Our Lives

George Washington said, “Nothing could be a more melancholy and distressing sight than to behold those who have shed their blood or lost their limbs in the service of their country.” That quote is on the wall, too.

Harold Russell, who lost both hands in World War II, said, “It could be the end of the world for me or it could be the beginning of a whole new life.”

Harold’s performance in The Best Years of Our Lives won him the Oscar for Best Supporting Actor, where he played a wounded veteran.

Michael Naranjo is another veteran on the wall. He lost his eyesight to a grenade in Vietnam and went on to become a sculptor.

Joe Bakani said that he thought his life would be a lot more dull if he hadn’t been wounded. “It’s actually a blessing to me wounded in the name of my country,” he said.

The American Veterans Disabled For Life Memorial was originally conceived before the wars in Iraq and Afghanistan began. That’s how long it takes to navigate the federal bureaucracy. The project cost $81 million, all of it through private donation. The memorial is located at the foot of Capital Hill.

They wanted it to be close to Capital Hill so that they could see them, since so many Capital Hill decisions affect the daily lives of veterans.

There are 18 quotes on the memorial, chosen by a panel that did not know the author’s names. The quotes are on reflective and transparent glass. There are also first-person quotes of veterans and caregivers, with moving statements.

Around the memorial, there’s a grove of ginkgo trees, a species nearly wiped out in the Ice Age that made a comeback. Twenty years from now, those ginkgos will reach their full size and provide a canopy over the glass panels.

Joe Bakani said he hoped when people looked at his picture on the glass wall, they see into his soul. “I hope people can see beyond the wheelchair, that there’s still a young man in there with many more years left to live, to make something of himself,” he said.