Baseball legend Pete Rose has had a storied history. The man was banned for life from baseball in 1989, after betting on his own team’s games. He talked with Sunday Morning’s Lee Cowan about his fall from grace and his legacy.

Rose said he is a part of history, and he believes he will go to his grave as baseball’s hit king. On September 11, 1985, he became the sport’s hit leader, a record he still holds. The former Cincinnati Reds player has had that legacy overshadowed by his fall from grace. Locals still love him, and apparently being banned for life doesn’t keep him from attending games. 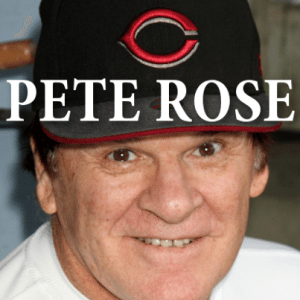 “The Hit King” is still beloved by hometown fans, and he recalled skipping school as a kid to attend games. In high school, he was a football star. His uncle was a scout for the Reds, and that is probably what changed his life.

As a rookie, Rose was not accepted by his teammates. He called himself brash, but claimed he was not arrogant. His baseball career started in 1963, living with his parents on the city’s west side, near the banks of the Ohio River. He also once worked on the Boone County No. 7 ferry.

Rose took Sunday Morning to the field where he played baseball as a child. Now he is surprised that Pete Rose Way has been named after him during his lifetime. He was a part of two Reds World Series championships, and another with the Philadelphia Phillies. His stats include 4,256 hits, 14,053 at-bats, and 3,215 career singles.

Rose does talk to minor league and independent teams, telling them that his keys to success were hard work, desire, and enthusiasm, which he called “God-given talents.”

Rose played hard, and he has inspired generations of fans. Now he is 73 years old, but his biggest connection to the game is autographs and photo ops. Now a resident of Las Vegas, Rose is engaged to a model; this would be his third marriage.

He spends many days signing autographs at The Art of Music memorabilia shop at Mandalay Bay. There are plenty of baseball artifacts available for fans. Rose, whose gambling made him ineligible for the sport’s Hall of Fame, could arguably be more popular for not achieving the honor. Fans who greet him don’t seem to mind.

Rose endorses products and does charity events. He even made light of his banishment in a recent Skechers commercial.

But some, like former MLB commissioner Fay Vincent, think his punishment is fair. Vincent, who took over in 1989, shortly after the player’s exile, thinks Rose never meant his apologies. Rose bet on the Reds when he was managing the team; gambling in baseball has been a big deal since 1919, when the White Sox took money to lose the World Series.

Vincent gives Rose credit for his accomplishments in the game, “but he cared about money even more.” What did Rose have to say about his behavior? Not much beyond “I screwed up.” He never thought about getting caught, and instead of an apology, Rose spent 15 years denying the accusations. If he had owned up sooner, things might have turned out differently.

Despite everything, Rose believes that he will make it into the MLB Hall of Fame, even if it is after his death. Though he is banned from the hall, Rose visits Cooperstown, New York at the time of the induction, where he sells autographs and definitely draws a crowd. He does apologize in autographs, though, signing balls, “I’m sorry I bet on baseball.”

Tell us in the comments what you think about Pete Rose and his lifetime ban.