Actor Danny Aiello has been appearing on movie screens for decades, in films like The Purple Rose of Cairo and Moonstruck. Now the actor is telling his own story for the first time in his memoir, I Only Know Who I Am When I Am Somebody Else. He reflected on his life and career with Sunday Morning’s Tracy Smith.

Aiello said that when he is in character, he knows what to say and do, which is easier than the uncertainty of real life. His career has spanned four decades and included more than 90 roles. He got his first job at age 9, as a shoe shiner. He went on to join the Army as a baseball player who entertained the troops. 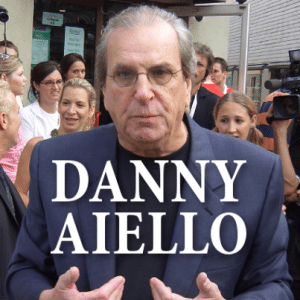 Danny Aiello, who transitioned into acting in his 30s after stints at Greyhound and cracking safes, has written a memoir saying he doesn’t know himself. (Dave Azoulay / Shutterstock.com)

After war, he met Sandy Cohen, and his love for her hypnotized him. They were married in 1955, and had four children. They have been married for nearly 60 years, despite their many differences. She said that she has a better idea of who he is than he does, calling him “a hard person to figure out.”

When they met, he was a hustler at the pool table. But he soon needed a more reliable income, and he got a job at Greyhound, working his way up from baggage handler to public address announcer. He recited the old routes from memory on a visit back to his old post. A union leader, he was fired following an unauthorized strike.

This was followed by a brief stint as a criminal, throwing safes out windows in hopes that they would break open and pay off. He admitted being disgusted with this period of his work life. Later, he became a bouncer at The Improv, which led to filling in as an emcee. He transitioned into acting at age 36, working with Robert De Niro in Bang the Drum Slowly.

Years later, in 1990, he received an Academy Award nomination as best supporting actor in Do the Right Thing. But Aiello believed he should not have won, and thought it might have cheapened the award. Two sons also went into acting: Rick is an actor, and Danny III was a stuntman before dying of Pancreatic Cancer in 2010.

Work helped him find comfort following the numbness of losing a son. Now Aiello is 81, and he is aware of his own mortality. He also does not like airplanes, “because I would hate to think I died and they didn’t hear my last words.”

He learned an acting trick from Madonna: listen to yourself in your car. He does that in his Jaguar, whether it’s learning a character, memorizing lines, or arranging music for an album. For someone who does not know who he is, Danny Aiello seems to at least be keeping busy, which may be one of his secrets of longevity.