The Enigma Machine was used by Nazis to send secret messages in World War II, until a man named Alan Turing cracked its code. His story is told by Benedict Cumberbatch and many others in a new movie, as Anthony Mason explained in a Sunday Morning interview.

In 1939, British intelligence moved its codebreaking operation to Bletchley Park, where it recruited top cryptographers like mathematician Alan Turing, portrayed by Cumberbatch in the 2014 film The Imitation Game. Turing may have been considered a prodigy by others, but in a scene from the movie, the character questioned whether he measured up. 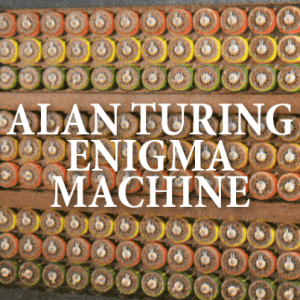 Cumberbatch prepared himself for the role in part by learning about the Enigma Machine, Germany’s encryption device, on display in a museum. Turing approached the code like a math problem. The actor said his real-life inspiration understood that only a machine could beat a machine.

Mason visited Hut 8, where Turing worked in secret to do what no one at the time thought possible. He worked with a team using machines captured from Germans to attempt to break a code that changed daily. Pressing a letter on the keyboard would illuminate another letter, letting someone know what to write down in code.

Alan Turing conceived a machine to eliminate potential codes, made up of the equivalent of 36 Enigma Machines looking for answers. The machine depicted on CBS Sunday Morning is the only one that is still operational in the world. It is recreated in a dramatic scene from the film.

“Hairs literally stood on the back of my neck,” Cumberbatch said as he recalled filming the pivotal scene that allowed cryptographers to crack the code and turn the tide against Germany. Turing’s work is believed to have shortened the war by two years, potentially saving millions of lives.

Jim Hendler, a professor of computer science, has taught a course on Turing and his accomplishments, which have had an impact on cryptography, computer science, and artificial intelligence. Shockingly, Turing worked in anonymity and under secrecy.

Turing’s family only learned the details of his stunning achievements when the BBC profiled him in the 1970s. Following the war, Turing became a marathon runner and moved to the University of Manchester to do research. After being prosecuted for having relations with another man, he ate a cyanide-laced apple to kill himself in 1954, at age 41.

In 2013, he was finally pardoned, and now he is remembered as a war hero and compelling movie character. Cumberbatch believed the man’s life should have lasted twice as long. Who knows what he might have revolutionized?