Though Sam Smith is relatively new to most music fans, he is already a hit thanks to his soulful song “Stay with Me.” For CBS Sunday Morning, Anthony Mason visited the singer in England.

Mason said that his “soulful falsetto” has made him a worldwide star. Sam Smith admitted that he was not prepared for this kind of success. In 2014, he had two songs top the charts in Britain, which is something he said he wanted badly. “The thought of being 60 years old and thinking ‘I could have tried harder’ makes me feel sick,” he said. 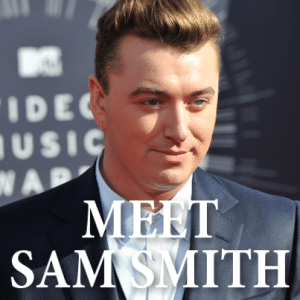 Sam Smith, the breakthrough recording artist, took CBS Sunday Morning back to his hometown of Great Chishill and reflected on the makings of his success. (Jaguar PS / Shutterstock.com)

Smith was a musical guest on Saturday Night Live, which he told Mason was terrifying. His manager made sure he knew how important that moment was, which just added to the pressure. But it worked, and his album In the Lonely Hour became the year’s bestselling debut album. Did you know he is 6’3″?

He explained that he comes from a town 30 minutes from Cambridge on one side and an hour from London on the other. That town is Great Chishill, where he took Mason. Before his teens, he had a plan for success that has so far come true.

His banker mother and stay-at-home dad knew he had talent. So did the neighbors. Jim Cunningham recalled overhearing him singing. He was in the musical at his grade school, and he returned there to find that the current students are familiar with his musical success.

His dad also found a music teacher for him, Joanna Eden. The first song he sang for her was “Come Fly with Me,” and he landed a manager by age 12. Smith said he had doubts because he knew the adults around him were lying to him, which made him question his talent and ability. Those doubts persist in spite of his success.

“I don’t understand what people hear in my voice,” he said. Electronic group Disclosure definitely heard something, and they asked him to sing on their track “Latch.” Then Smith began writing songs with producer Jimmy Napes, like “I’m Not the Only One.”

As for that smash hit “Stay with Me,” there is no gospel choir. It is all Smith’s voice, in about 40 overlapping takes. “I’m kind of annoyed that everyone thinks it’s a gospel choir,” he said. I would be annoyed too! I had no idea.

Here’s another surprising fact: the album is inspired by Smith’s unrequited love for a married man. “I told all my secrets on that album,” he said. “I didn’t realize quite how much I was revealing.” Mason credits the voice and the vulnerability with Smith’s success. After such a smashing debut, I’ll be interested to see what he has to say and sing about next.