Michael Keaton is 63. When did that happen? He talked with CBS Sunday Morning about his latest film, The Birdman. Audiences have not seen him in a few years, and he talked about his career with Lee Cowan.

Keaton has been enjoying a quiet life in the Big Sky Country of Montana. He lives in a quiet escape, but says he does not have anything against Hollywood. The star of films like Mr. Mom, Beetlejuice, and Batman.

He admitted to Sunday Morning that he has intentionally dropped out, passing on projects that did not interest him. Now he is back with an engaging performance in Birdman, which may already be generating Oscar attention. 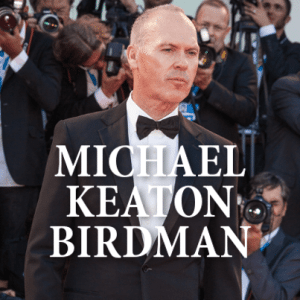 Actor Michael Keaton reflected on his career, from comedy to action and drama, as well as his anticipated return to the screen in the new film Birdman. (taniavolobueva / Shutterstock.com)

He stars as Riggan Thomson, an actor best known for his role as comic book superhero The Birdman. He is haunted by that legacy, and hopes to reinvent his image by taking the Broadway stage. Cowan asked about the autobiographical strokes, though the movie was not written with him in mind.

“I probably relate less to this character than anybody I’ve ever done,” Keaton said. “That’s the irony.”

Born Michael Douglas, he was the youngest of seven kids in Pittsburgh. Keaton claims now that he does not like attention, but he thinks he must have enjoyed it as the baby of the family. He started out as a prop man on Mister Rogers’ Neighborhood at PBS station WQED.

Eventually, Keaton was able to get in front of the camera. He also changed his name to avoid confusion with fellow actor Michael Douglas and TV host Mike Douglas. Cowan claimed that his “frenetic energy” and “charm” got him noticed in roles like Night Shift and Mr. Mom.

His dramatic roles included a coke addict and a sociopath, and Keaton said he loves to be unleashed in a role. That made him perfect to work with director Tim Burton on Beetlejuice. “You can never say, ‘My character wouldn’t do that.'”

The choice of Keaton for Batman was questioned (it always is—just ask Ben Affleck). But it paid off as a high-grossing film, and he reprised the role in Batman Returns. Despite reportedly being offered $15 million, Keaton declined to return for a third installment.

Keaton popped up as the voice of Barbie’s pal Ken in Toy Story 3, proving that he works when he wants to. Now he’s back in Birdman, which features “long, unbroken takes” that the actor called difficult and “intense.”

He said that he does not believe in luck, but he does know that “good fortune” is “unbelievable.” Keaton’s Birdman is in theaters October 17.