CBS Sunday Morning talked about a tiny football team in Wallkill, New York, called the Wallkill Mighty Mites. They’re coming off their toughest challenge to date. The team of little kids tried their best to break a banner on the field, but they didn’t break it. Instead, each one rear-ended the next, resulting in a 20-kid pileup. The video of them failing to break it went viral last week, but the kids say they won’t give up and they’ll keep taking a run at it until it breaks. 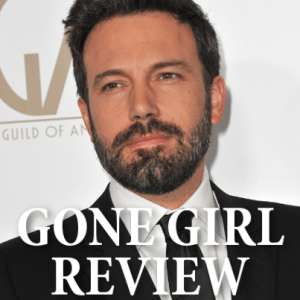 Meanwhile, their coach is trying to figure out what went wrong the first time. The banner is made to velcro apart. The coach thought the problem was the orientation of the sign the last time. It was facing the wrong way, so it was harder to tear away. But when he tried to demonstrate how easy it was to break the other way around, he had a hard time breaking it.

It’s a new season at the movies and David Edelstein had a review of the hotly anticipated new film Gone Girl. He said he was wary of spoiling the movie for people during his review, but he called it a “triumph on its own sick terms”. He said people need to engage with it on a deep level.

Ben Affleck’s character is a guy whose wife, played by Rosamund Pike, disappears in a way that suggest she was murdered. The police suspect the husband. But David Edelstein said that’s just the beginning of the “psycho-marathon” of the movie.

The movie was directed by David Fincher, whose breakthrough film was Seven. His films focus on rot, David Edelstein argues, “moral or physical or both”. He said that Fincher often examines truth and how it’s rarely glimpsed.

Gone Girl shows Ben Afleck’s character’s descent into infamy, with excerpts from his wife’s diary, shown in excerpts. Edelstein said he had problems with Ben Affleck as an actor before because he has a “handsome lug lack of commitment”. But that’s what Fincher works with: Ben Affleck’s evasiveness. Meanwhile, he also said Pike is “exquisite”.

Edelstein also wondered whether Gone Girl is misogynistic, even if it was written by a woman. But he said that was up for us to decide. He said “it’s a hell of a film.”