Pop star Lady Gaga and crooner Tony Bennett have teamed up for an album of duets, and for Sunday Morning, Anthony Mason delved into how this came together. The two may seem like an odd couple, each with a different reputation.

Bennett said he wanted to do an album with Lady Gaga from the first time they met. Gaga said she has been singing jazz since childhood, and no one noticed for a long time. She is 28 and he is 88, but they seem to have quite the rapport. 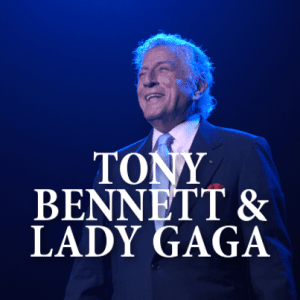 Though they are six decades apart in age, Tony Bennett and Lady Gaga are in step musically and have collaborated on a new album of duets, Cheek To Cheek. (Eugene Parciasepe / Shutterstock.com)

The pair hit it off at a charity event, and have been close ever since. She even climbed a ladder to serenade him when he attended one of her concerts this year. Despite their 60-year age difference, they live a block apart in New York City, across from Central Park.

They each have an affinity for art. They are both Italian Americans, and Mason wondered whether that was important in their connection. “She understands me and I understand her,” Bennett said, before reflecting on a photograph of his mother; he said Gaga reminds him of her.

Bennett grew up in Astoria, Queens, and he started out as a singing waiter before his entertainment career took off. He dropped the stage name Joe Berry after Bob Hope helped him fashion the name Tony Bennett, based on his real name.

He was signed by Columbia Records and his first single, “Because of You,” hit #1 in 1951. It was the first of 20 top 40 hits for Bennett in that decade. In Life Magazine in 1965, Frank Sinatra gave Bennett a rave review and introduced him to a larger audience.

Bennett has now been performing for seven decades, and performed at the iTunes Festival in London in summer 2014. He has plenty of lessons in longevity for Gaga and others. There is always someone coming up behind you, but talented performers can continue to succeed for years to come.

Lady Gaga had her own meteoric rise, with two singles hitting #1 in 2009. However, 2013’s Artpop, did not quite meet expectations. She reflected on that a year later, saying “some people were holding me to a very high standard.”

Six years of working nonstop left her exhausted, and she told Sunday Morning that she needed a break. “I crashed,” she admitted. “With everything that was happening, I just didn’t even want to make music anymore.”

She almost broke down while performing at the YouTube Music Awards in November 2013, and she says she is “not really legally allowed to say what happened that day, but, you know, my partner left me. And he told the whole world that I left him.”

Mason confirmed that this was a reference to her split with manager Troy Carter, days before the release of Artpop. After seven years together, Gaga felt she was being taken for granted by her management.

“I felt abandoned, but that’s my own issues,” she said. Mason asked her what she wants now. “I just want to be happy, and I can’t tell you how happy singing this music makes me,” she said, wiping tears.

Lady Gaga said that Tony Bennett has always been supportive of her standing up for herself and her own standards. His advice to her was not to let others take down the quality or intelligence of her work.

Bennett paints every day in his studio, and Gaga gave him a painting representing the demon she helped him face. She also hired a plane to fly around San Francisco, where Bennett was celebrating his 88th birthday, bearing birthday wishes from her.