The all-star cast in the current revival of a Broadway play spoke with Lesley Stahl for CBS Sunday Morning. The production of It’s Only a Play by Terrence McNally boasts a full cast of famous names. But what happens behind the curtain? 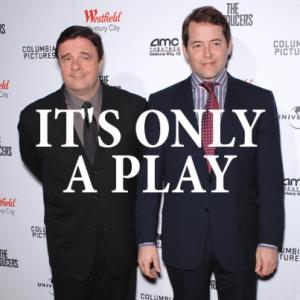 The star-studded cast of the Broadway revival of It’s Only a Play talked with CBS Sunday Morning about theater superstitions and the importance of reviews. (Featureflash / Shutterstock.com)

Stahl was onstage with F. Murray Abraham 40 minutes before the curtain went up on a performance. He admitted that he still gets nervous after 53 years, though “it’s a good kind of nervous.” He was observed doing exercises on the set before vocal warm ups. Tony winner Nathan Lane and new actor Micah Stock could also be seen running lines backstage for the playwright.

Many actors have superstitions and tricks that help them get into their roles. Stahl followed the cast to a gathering at Joe Allen. There, she spoke with Rupert Grint, Megan Mullally, Matthew Broderick, and Stockard Channing.

Grint said that he never changes the knot in his tie. That is his superstition, and he remains superstitious before his first entrance each night. They don’t have to worry about ticket sales, because the show’s run is already almost sold out.

The play is about a review of a play, taking place in a bedroom at the opening night party, as the cast anxiously awaits the words of a critic. Broderick said that the characters’ relationship is familiar to him; his character is the playwright, while Lane portrays his actor best friend. Mullally is the show’s “ditzy producer.”

Stock plays Gus, an aspiring actor on coat check duty, while Grint is the trendy director and Channing plays a drug-addicted actress. Abraham is the “infamously cruel critic,” whose words inspired Channing’s actress character to change both her name and her face.

The subject of reviews can be taboo in the world of performing arts. Lane said that talking about critics is dangerous territory for actors. The play focuses on the wait for a review from Ben Brantley of The New York Times. The actors debated whether Brantley would choose to recuse himself from evaluating the production.

Stahl got in trouble for suggesting that the play is already a hit, due to its successful ticket sales. The jovial cast nodded to superstition, agreeing that word of mouth must be good so far. That doesn’t always happen. Channing’s Broadway debut in No Hard Feelings closed after one night.

Audiences will delight in the jokes at the expense of real people from the world of entertainment. But even if those people are in the audience, the cast cannot shy away from the material. It’s Only a Play is slated to run through January 5 2014 at the Gerald Schoenfeld Theatre.