Billy Idol has been rocking for decades, and he tells his story in the recently published book Dancing with Myself. He spoke with Tracy Smith for CBS Sunday Morning about his life and career so far.

Billy Idol, age 58, still has that MTV image as he prepares for a new US tour in a nondescript Los Angeles building. He was a hot star of the 1980s, as classic music video evidence illustrates. The swagger, the sneer, and the platinum blond hair made for quite the look. 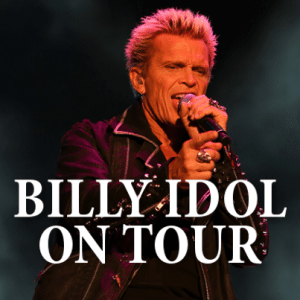 Rocker Billy Idol, who wrote his autobiography and is about to embark on a US tour, talked with CBS Sunday Morning about his life and career to date. (Filipe B. Varela / Shutterstock.com)

“You have to have one hell of an attitude to get anywhere in the music business,” Idol said of his megastar beginnings as a music video star. He defines his style as the best of rock and roll and punk rock.

Idol has has 16 songs make the Top 40 during his career, though there were a few covers in the mix as well. Billy Idol is a stage name for the man born William Michael Albert Broad, the son of a tool salesman and a surgical nurse. He was born in England, grew up as a Cub Scout, and quit college to make music.

Though his parents objected, Idol wanted something more glittering than his father’s sales career. “I always though to myself, the only weakness he’s got is he’s selling a product that’s not himself,” Idol said.

Billy joined the 1970s punk band Generation X before taking on the surname Idol. Then, in the 1980s, he was on his own, making a name for himself as a musician and a womanizer. He said that it was hard to maintain a relationship on a 10-month tour while living on a bus and eating an endless parade of fast food.

“You wanted something to break up that monotony, and the only way to do it was a piece of human flesh,” he said. During his time living in New York’s East Village, he spent time buying drugs in Washington Square Park, where dealers would name their drugs after his songs. He ran into trouble with the police at one point and struggled with crack addiction for a time.

Billy Idol almost lost his leg in a 1990 motorcycle wreck, before overdosing in 1994 outside a Los Angeles nightclub. He tried to clean up his act, though he said he is not totally sober these days. It seems to have something to do with his mindset and cutting himself off from options, which could cause him to relapse.

These days, he does a little drink and smokes a lot of marijuana, but hard drugs are off limits because he said he does not want to be braindead. He is also more grateful for his audience this time around. “Thank you for making my life so really great,” he said to his fans.

Billy went home to say goodbye to his father, who passed away from cancer in summer 2014. He and his father had a heart-to-heart, in which Billy admitted that he was crazy to pursue his dream of music. That is a gamble that definitely paid off in the long run.