America’s infrastructure is literally falling apart, from roads and seaports to bridges and airports. Though most people would agree that “decades of neglect” have put the country in this position, Steve Kroft found for his 60 Minutes report that there is no agreement on what should be done about this.

A lack of funding and what the correspondent called “political paralysis” are what could cause your daily commute to crumble. Potholes are just the tip of the iceberg. One in nine U.S. bridges are structurally deficient, and former secretary of transportation Ray LaHood has plenty to say on this subject.

He served during President Obama’s first term, and before that, he served seven terms as a Republican congressman from Illinois. Now he works as co-chair of the bipartisan coalition Building America’s Future, which wants to see more spending on infrastructure.

LaHood spoke about the 70,000 structurally deficient bridges in the U.S., and I did not find his comments comforting. “I don’t want to say they’re unsafe, but they’re dangerous,” he said. The clock is ticking, if not expired, for many of these significant projects.

60 Minutes traveled to Pittsburgh, which typifies some of the problems. There, Kroft met former American Society of Civil Engineers president Andy Herrmann. The city has more than 4,000 bridges, and 20% of those fall into the category that need critical attention.

That list includes the Liberty Bridge, a main artery for city residents. It was constructed in 1928, and vehicles simply weighed less in those days. The bridge was built to last 50 years, and after 86 years of use, it has nearly doubled its intended lifespan. 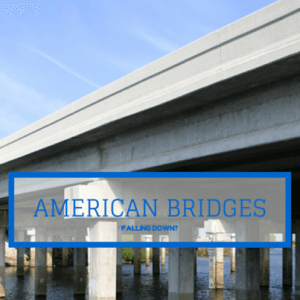 60 Minutes looked into the structurally deficient bridges and other inadequacies facing infrastructure in the United States, including planes and trains. (Tom Fawls / Shutterstock.com)

One of the city’s arch bridges has a structure built beneath it to catch “falling concrete,” according to Herrmann. Apparently the state of Pennsylvania cannot keep up with the mounting problems it is facing. Residents in Philadelphia also face challenges.

The state’s former Democractic governor, Ed Rendell, chatted with 60 Minutes about a particularly heavily traveled section of I-95 in the state. In the 22 miles of that highway that go through Philadelphia, there are 15 structurally deficient bridges, and fixing all of them would cost $7 billion, Rendell explained.

In 2008, Pennsylvania Department of Transportation contractors spotted a critical gash in one of the city’s bridges, and it’s a good thing they did. That’s because construction crews had to be immediately called into buttress a column, closing the bridge for three days for repairs, but probably preventing a catastrophe. “There’s a strong likelihood that bridge would have collapsed,” Rendell said.

Those I-95 bridges date back to the 1960s. You might remember the I-35 bridge collapse in Minnesota in 2007, which killed 13 people and injured 145 others. In May 2014, Washington state’s Skagit River Bridge collapsed when a truck hit one of its trusses.

But wait, there’s plenty more bad news. The American Society of Civil Engineers said that 32% of America’s major roads are also in need of serious attention. But the federal Highway Trust Fund is not providing much in the way of funding. It generates 18 cents per gallon as a national gas tax, but that’s not nearly enough to keep up with the demand for funds.

“It’s falling apart because we haven’t made the investments,” Ray LaHood said, noting that the last increase on that gas tax came more than 20 years ago, in 1993. He pointed a finger at Washington politicians, accusing them of being afraid to raise taxes.

In the meantime, the U.S. has fallen to 16th in the world in terms of infrastructure, behind countries like Iceland and the United Arab Emirates. Caterpillar and GE are among the U.S. companies that say these problems are threatening their profits.

Tom Donohue of the U.S. Chamber of Commerce is in support of raising the gas tax, and so is AFL-CIO president Richard Trumka, who thinks that increased spending on addressing infrastructure needs could create tens or even hundreds of thousands of jobs.

No one seemed to be talking about infrastructure during the 2014 midterm elections. Pennsylvania Congressman Bill Shuster chairs the House Transportation Committee, and he declined to speak with 60 Minutes about any of this, which is not a great sign.

60 Minutes did score an interview with House Ways and Means Committee member Earl Blumenauer, who said that the last time Congress passed a transportation bill was in 1997, though there have been 21 extensions since. He said he has been trying “for 44 months to at least get a hearing on transportation finance on the Highway Trust Fund that is slowly going bankrupt.”

He pointed the finger at both parties, noting that the Bush administration had two blue-ribbon commissions that recommended raising the gas tax and finding more money, while the Obama administration has had, he said, “a lack of enthusiasm for raising the gas tax.” I suppose you can see why it may have been unpopular in recent years to propose raising gas prices, but at some point it has to be necessary, right?

The U.S. is also short on airport runways and gates, and air traffic control systems are out of date, which is contributing to congestion for air travelers. Meanwhile, only two of 14 East Coast seaports will be able to accommodate new, larger cargo ships from the Panama Canal.

What about trains? The world has 14,000 miles of high-speed rail lines, and of those, zero can be found in America, according to 60 Minutes. Amtrak president and CEO Joe Boardman showed 60 Minutes a 104-year-old railroad bridge over the Hackensack River in New Jersey.

Since it sees nearly 500 trains daily, “it’s the busiest bridge in the Western Hemisphere for train traffic,” Boardman said, adding that the bridge is “safe…but it’s not reliable.” The Portal Bridge was obsolete nearly as soon as it was completed in 1910. As a swing bridge, it opens to let barge traffic pass on the river, but it doesn’t always lock back in place the way it is supposed to.

This causes traffic delays from Boston to Washington, D.C., frustrating travelers and causing countless other domino-effect problems along the way. Design work to replace the bridge has already been completed, and it’s ready to be built, as soon as someone comes up with about $1 billion to do the work.

Boardman suggested that Congress could fund this bridge as a sign of progress on the issue of infrastructure. While some legislators are in favor of raising the gas tax, others have suggested corporate tax reform as a funding option. What do you think it is going to take to get this done before something terrible happens?