Bill Whitaker took 60 Minutes to Italy, but not to one of the country’s popular tourist destinations. Instead, he visited a lesser-known but historically and musically rich city: Cremona. There, the Stradivarius Violin was born. Centuries ago, the musician started a tradition and standard of quality that others have been struggling to attain ever since.

Antonio Stradivari was crafting violins in the 17th and 18th centuries, and his legacy looms large in this tiny town. There, you will even find him honored at the Violin Museum. Dr Paolo Bodini, a former Cremona mayor, is now director of the museum, where he proudly showed off the Treasure Box for 60 Minutes.

The Treasure Box contains four violins all hand-carved by Stradivari. Bodini’s favorite is the 1715 violin, due to its sound. Though the craftsman created 1,100 instruments, most have been lost or decayed in the hundreds of years since. However, those that are known to have survived are in great condition, and musicians clamor to acquire them. 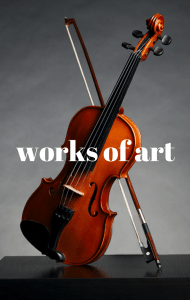 60 Minutes also showed performance footage from Los Angeles’s Strad-Fest, where several Stradivarius Violins were played together onstage. Cremona has been active in bringing some of the city’s beloved son’s greatest creations back home. Also proudly collected in the Italian city are older instruments carved by the Guaneri family, and a 1566 instrument credited to the man believed to have invented the violin, Andrea Amati.

To keep them in good condition, the instruments must be handled and played every month or two, meaning that they can’t simply sit on display. “They need to vibrate to be kept alive,” Bodini told 60 Minutes. Who has the honor of keeping these historic pieces in working order?

Anastasiya Petryshak was accompanied by armed guards as she took a 300-year-old violin onstage to perform for a classroom of local schoolchildren. Itzhak Perlman is currently one of the world’s most celebrated violinists, and he refers to his classic Stradivarius as a “fiddle,” and also “the violin of my dreams.”

60 Minutes: A Sparkle to the Sound

“I can actually see the sound in my head,” Perlman said of the experience of playing one of the time-honored instruments. “There’s a sparkle to the sound,” which he told Whitaker “could be the DNA of the city.”

Cremona may not be on the standard itinerary for a tourist’s trip to Italy, but it continues to play its part as a modern international city. Here, Whitaker found that it still produces and exports thousands of violins annually, boasting 150 violin shops.

Violin makers have relocated here from Hungary, Austria, and Holland, thanks to the rich musical culture and tradition of Cremona. Mathijs Heyligers of Holland is among the craftsmen who appreciate the fact that the streets and houses of Cremona haven’t changed in the centuries since Stradivari called them home (though shops do now have electricity).

Still, violins here are not produced using power tools or large machinery. Heyligers explained that the choice of wood has to do with the sound you want the instrument to end up with. Violin makers have been using wood from the same forests for centuries: Bosnian Maple and Italian Red Spruce.

As visitors gather among the forests each year, a violinist plays a concert to the trees. Heyligers explained that the way the wood is cut, down to the wind and humidity, can all affect the sound of these glorious instruments.

Perlman said that no one is probably making a violin as well as the city’s old masters, but he is open to someone proving him wrong. “There is nothing like a fine Italian sound,” he said. There are only known to be around 650 Stradivari instruments still in existence, and they can sell for millions.

Perlman, who bought his before the prices climbed to $16 million, would not give up the feel of his instrument in exchange for a payday, he said. Though lucky owners may like to play them often, violin restorer Bruce Carlson explained that decades and centuries of use can be hard on the instruments.

They must be taken apart to be fixed. One of his customers had a violin fall apart while it was being played. 60 Minutes correspondent Whitaker said he would be afraid to work on something with such a valuable history. Carlson compared violin repair to surgery, saying he has to think about the work and not the potential risks.

Carlson learned his craft in the city of Cremona, where students still flock to learn the art. Student Chris Kurz left Penn State behind for a life in Cremona, where it took him a full year to make his first instrument. He said that he can walk down the street there and speak with others along the way to get their input and advice. They really paint a picture of this musical city, and I for one would be tempted to include it on my travel itinerary if I visit Italy.