Detroit is the largest American city ever to file bankruptcy, which is a surprising turn for a city that has given the country so much. Bob Simon reported that this city has been enduring a slow decline over half a century. Corruption, race riots, the economy, and even bad luck may be factors, and the city is $18.5 billion in the hole. What happens for the Michigan city now?

Has the city hit rock bottom yet? Those who are still hanging on are hoping that the only place left to go is up. Every time I see footage of abandoned, dilapidated, collapsing buildings in Detroit, I can’t believe the images.

Vandalism, neglect, and fire are all taking their toll on the city’s buildings, where public services such as street lights and police response are scant. Even the fire department has trouble battling blazes, with their limited equipment and budgetary resources.

Jonathan Frendewey, a firefighter, said that his company’s gear is mostly in working order, except for the tank that is supposed to hold water on the firetruck itself. It has gone unrepaired for at least a year, making it hard to literally put out fires. They end up fighting blazes ineffectively with garden hoses. 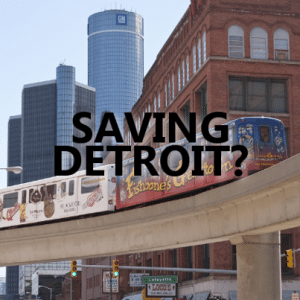 The city of Detroit, Michigan, is the largest in American history to file for bankruptcy, after decades of decline. Can Dan Gilbert turn it around? (Steve Pepple / Shutterstock.com)

Residents may be resigned to neglect and decay for so long that they no longer expect better for themselves. Camille Rhymes lives across the street from an abandoned school, where criminals have set up shop. When she called the police for help one night, it took two to three hours for them to respond.

The city sprawls over 139 square miles, which is larger than Manhattan, Boston, and San Francisco combined. It holds 80,000 abandoned buildings, but not all of the city has been left behind. The city’s downtown is enjoying something of a renaissance.

Dan Gilbert, a Detroit native, founded Quicken Loans, which provides mortgages. Now he has invested over $1 billion of his personal fortune to revitalize the downtown area. For his skyscrapers, he paid “less than what you would pay for one year’s rent per foot in New York City.”

Gilbert said that the Hollywood depiction of investors as greedy does not fit here. But now he is the city’s second largest private landowner, behind only General Motors. Now how does he fill those buildings up with people?

The city has lost 2/3 of its population over 60 years, and those who fled may be reluctant to return. Gilbert moved his headquarters to downtown Detroit three years ago, from the suburbs. He entices his employees with subsidies to live in the city, and the fringe benefits include shuttle service to work.

What about safety, given Detroit’s skyrocketing crime rate? A high tech security command center has 300 cameras around downtown, constantly monitoring the goings on. Gilbert said it is about keeping his employees and tenants safe.

There are now 90 companies located in his downtown buildings, including Chrysler. Gilbert’s vision for the future is a tech-driven town. An old theater sat empty for 25 years before becoming home to one of Twitter’s offices. Another 20 startups are setting up shop thanks to the man’s investments.

But how is he talking companies and their employees to make the leap? “You can impact the outcome in Detroit. And that’s crazy, but it sells,” Gilbert explained. Companies can see how their presence and business affects the city, and he is banking on a comeback.

However, reality hits hard when you step outside the downtown area. The investor admits that it will take time for the neighborhoods to turn around. Though many residents have stayed put, not all of them are as optimistic as Gilbert.

John George took 60 Minutes on a tour of his boyhood neighborhood, Brightmoor. The former middle class neighborhood is now a mostly abandoned dumping ground. George said that the decline did not happen overnight or due to a natural disaster, it’s easy for the federal government and others to look the other way.

George is doing his own thing by pitching in as a leader of a volunteer group, which demolishes abandoned houses and clears out the blight. “Blight is a very cunning adversary,” he said. “You’re constantly battling that enemy.”

He and other activists have worked, with the support of business interests such as Gilbert’s, have already tackled and demolished 300 blighted houses. There are still 80,000 to go, and the task is overwhelming.

WIth the houses gone, the city is becoming something of an urban jungle. Paul Weertz, a former public school teacher, is now an urban farmer, cultivating crops in what used to be a neighborhood. He plants kale, eggplant, tomatoes, garlic, potatoes, and more.

This is becoming a commercial venture, as locally sourced farm fresh food catches on with local residents. It’s another sign of the city’s recovery. The state government put the city in a state of financial emergency, and put Kevyn Orr, a bankruptcy attorney, in charge of turning the tide.

Can Orr shake loose a billion dollars that will help send funds back to local agencies, providing basic government services such as fire departments and street lights once again. Orr said that things are already beginning to turn around in public safety, and a new police chief is coming into office.

Healthcare and pension costs are a huge chunk of the debt, and Detroit’s bankruptcy has yet to be approved. Bondholders and those counting on pensions may be getting pennies on the dollar as a result.

Orr said that an apology is truly all he has to offer when it comes to “the human cost. But we don’t have a choice. These choices have been made for us, a long time ago.” Even the Detroit Institute of Arts is not safe.

The collection housed here is owned by the city, and it was appraised by Christie’s auction house, sparking fears that the art collection may end up for sale. One way or another, the city needs to raise cash.

Orr has helped to secure $300 million in federal money to help clear out some of that blight. But the outcome of this chapter in Detroit’s history is still very much up in the air.