For three years, 60 Minutes had the privilege of going on a top secret mission with government officials. They ended up bearing witness to the takedown of what was possibly the most powerful cartel in history. Lara Logan shared the secrets of the Super Cartel in this report. 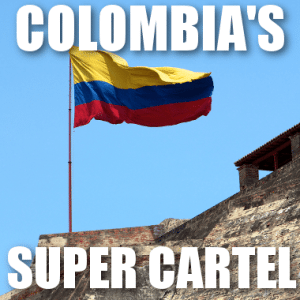 60 Minutes’ Lara Logan went behind the scenes of a three-year operation to bust a Colombian super cartel smuggling heroin out and cash into the country.

This operation in Colombia was larger than the Cali, Medellin, and Pablo Escobar cartels. Cocaine is still big business in Colombia, but the best way to make money on drugs is to move them, preferably in bulk. That’s what ended up taking American Immigration and Customs Enforcement agents by surprise.

Back in 2009, an ICE team got a look at the coast of Buenaventura, Colombia, acting on a tip about cargo loads of fertilizer. Inside, they found an unbelievable $41 million, more than they had ever come across before. I’m guessing nothing good happened to the tipster if he or she was found out. You don’t just neglect to notice that much cash is missing.

Luis Sierra, who ran the initial operation, was shocked when he and agents found themselves waist deep in cash, and it took them an entire month to count what they had seized. Working with the Colombian police, they counted the money in eight-hour shifts at a Bogota bank.

But that’s just the start of this story, which I can’t believe is not being made into a movie yet. “That was a routine shipment for them,” Sierra said, making the drug business sound even more lucrative.

When the money wasn’t traveling in shipping containers, it might have been going by car, in luggage, or hidden in furniture.

Lara Logan compared the cartel to a conglomerate, and Sierra said it was like a Fortune 500 company, with a chain of executives in command. Those involved also insulated themselves from other aspects of the business, with the exception of top management.

To begin unraveling what was going on, local police and US agents followed the money. At the end of that train were three kingpins who had ruled the cartel for 10 years. They included Luis Caicedo, a former police investigator.

The other two leaders were Julio Lozano, a liaison to Mexican cartels, and Claudio Silva, who I guess would have been the CFO. According to ICE, this cartel was the source of over 40% of the Colombian cocaine found in America, and probably exported 900 tons in just seven years.

In Colombia, police commandos are known as “junglas,” which is a pretty cool nickname. These forces worked with US ICE teams to destroy known drug labs hidden in the country’s many jungles.

Without the labs, production of drugs is slowed to a halt. In making the cocaine, 60 Minutes explained that manufacturers soak coca leaves in gas and other chemicals. These makeshift labs don’t require much setup.

The junglas rigged some labs with explosives and simply sent them up in smoke. All the while, the top brass in the cartel were running the operation from coffee shops and restaurants.

Though that sounds public, investigators said it was hard to surveil and monitor their top targets because they were so elusive. The leaders maintained low profiles to further disguise what they were up to.

Why do all the work and take all the risks if you aren’t going to enjoy the ill-gotten gains? Luis Silva said one cartel member told them it was all about power.

The operation finally came together thanks to assistance from an undercover informant, who feared retaliation from the cartel.

According to this undercover cartel member, the leaders ran their drug businesses on the side while maintaining regular jobs. But they knew they were feared by those under them.

The secret agent managed to work his way into the inner circle as a money handler for the gang. He helped investigators track the flow of cocaine out and cash in to the hands of the super cartel.

This trail led agents around the world, to places like Morocco and the Netherlands, more than a dozen countries in all. In one intercept, the investigation recovered over one ton of cocaine on a submersible ship.

Surveillance was a part of the plan as well, and wiretaps helped Colombian police and the ICE team build an ironclad case. They worked to dismantle the cartel from the outside in, from the top all the way on down to the soldiers.

Luis Caicedo fled to Argentina for safety, but was quickly arrested there. It would not be long before the others were apprehended as well. Silva was hiding on a farm in the jungle, and his capture was caught by 60 Minutes cameras in 2010. His fatal mistake was calling his mistress, whose phone had been tapped.

Julio Lozano actually turned himself in to agents in Panama late in 2010. With the cartel completely dismantled, the fractured members were scrambling to put something back together.

Despite all the effort, agents know they only made a dent in the money and drugs the super cartel had been trafficking.

But Silva said he was still optimistic. “For an organization to become that sophisticated again…is going to be very difficult,” he said.

What do you think about the war on drugs? It seems like a lot of investment and resources to conclude that you only made a fraction of a difference in solving a seemingly insurmountable problem. But I guess that is one of the challenges of civilized society.