Though Zhang Xin has made a fortune in commercial real estate, some speculate that the China residential real estate market bubble is poised to burst.

Over the past 30 years, the country’s state-controlled economy has grown to the world’s second largest. But did they overdo it, creating a housing bubble? “The most populated nation on Earth is building houses, districts, and cities with no one in them,” Lesley Stahl said.

In the province of Zhengzhou, Lesley walked with Hong Kong financial analyst Gillem Tulloch down a highway during rush hour. But it was completely safe, because there was only one car on the street. 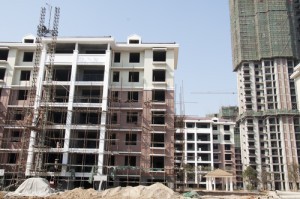 Lesley Stahl examined concerns about the China real estate bubble in the residential market, where buildings sit empty and values could come crashing down.

A ghost city was uninhabited for miles, with empty apartments and buildings stretching out for blocks. These homes are all owned by members of the middle class, who are looking for investment opportunities but do not have many options.

In China, you are not allowed to invest in foreign markets, and the stock market can be risky. However, the government allowed people to begin buying their own homes about 15 years ago. Property prices tend to outpace inflation in China, just as they once did in America.

In fact, some property values have more than tripled over the years, meaning some families are buying up multiple apartments as investment opportunities. “No nation has ever built so much so fast,” Stahl said in her report.

Tulloch said that real estate could account for up to 30% of the country’s economy. But China is building one or two dozen cities per year, without regard to whether anyone will live in them. It is one of the government’s methods of keeping its economy growing.

At a vacant shopping mall, Tulloch said that China’s infrastructure is growing too quickly to sustain itself. This mall’s storefronts were empty, and signs for American brands were actually fake enticements for investors.

“It’s all make believe, nonexistent supply for nonexistent demand,” Stahl said, listing off the brands and companies she saw on logos and empty storefronts.

In Mongolia, the city of Ordos was built for a million residents who never arrived. Then there is Thames Town, a replica English village and completed at least five years ago. It remains nearly empty.

The one thriving business in Thames Town is weddings, so at least it is a nice backdrop. If residents are pushing to move into cities, why are they not showing up at these developments?

Tulloch said that these apartments are not suitable for the income levels of those who would move into them. In addition, these new ghost cities replaced rice paddies and displaced millions of villagers in the process.

Stahl also encountered villagers salvaging bricks from their demolished homes, in the shadow of looming empty condos. Since an average villager lives on as little as $1 per day, the $50,000 apartments in the distance are out of their grasp.

Gillam said that villagers must be forced to relocate, but there are even more problems to come. There is now a real estate bubble that could burst, taking down generations and multiple classes of people if it does.

The construction workers could also soon be out of work as well. To back up these reports, Stahl spoke with Wang Shi, which is the country’s leading home builder. A former member of the Red Army, he secretly taught himself about capitalism, and was ready to jump in when communism fell.

The government has imposed a “one-apartment” policy, taming the bubble by bringing prices down. The consequences included debt for developers and unfinished projects.

Slowing construction weakened the the country’s overall economy, and Anne Stephenson-Yang took Lesley Stahl to an unfinished development once intended as a new financial district to compete with Manhattan.

The city has given a competing version of the problems facing this development, but the real story is probably that there is no money. Stephenson-Yang predicts that the country is facing a “debt crisis” that could cripple its economy and produce social unrest.

Jilted residential real estate investors have already begun protesting the devaluation of some properties, but it sounds like the worst is yet to come. Wang said that he is already a target of frequent protests.

There is no telling what could happen, but Wang feared an “Arab Spring” type of protest situation. He said that he hopes the country’s leaders can help the country avert a crisis.

Home sales are still in full swing, however. That’s because you can only buy one apartment per city, which means you just have to travel to the next town for another opportunity.

“Like us in our bubble, they just don’t believe the good times will ever end,” Stahl concluded. What do you think about this? Should China take a lesson from the US real estate market and slow down? Even if they want to, how can they without upsetting the delicate balance of a fragile world economy?