There are countless amazing stories from the war in Afghanistan, and one of them is getting a lot of attention recently. It occurred in 2005, when Marcus Luttrell and three other Navy SEALs found themselves outnumbered in a firefight. Luttrell was the only survivor, and he shared his true story with 60 Minutes and Anderson Cooper. How did the mission go so wrong, and what did goat herders have to do with it?

In addition to the three men in his unit, a rescue helicopter containing 16 other Americans was shot down, killing everyone on board. As of June 2005, “it was the largest loss of life in one day for naval special warfare since WWII.”

Retired vice admiral Joe Maguire, a former special forces commander, said that he thinks of June 28 2005 as a defining day in the Afghanistan battle. He said that the SEALs were devastated by the casualties. 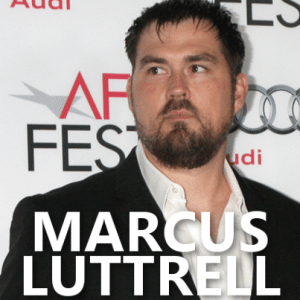 Luttrell is a twin; he and his brother both decided to join the SEALs while they were teens. His brother talked him into it, advertising the adventure, action, and daring that would be required. Marcus became a SEAL at age 25 and was proud to sport his trident as of February 2 2001.

Marcus Luttrell was one of 20 in a class of 85 to complete the program. Rigorous training is required for exactly the circumstances he would soon find himself in. Maguire said that SEALs are talented warriors.

“There’s this story that’s come to life because Marcus survived, and Marcus feels like he survived in order to tell the story,” Maguire said. On June 28 2005, Luttrell was a sniper and medic on his unit. He got to the point where he did not think he would survive or ever be rescued.

He packed his wounds with dirt so he would not bleed out, and he had no directional tools. He had been fighting alone for hours after losing his three comrades: Danny Dietz, Matt Axelson, and team leader Mike Murphy.

The team was part of Operation Red Wings, attempting to locate a wanted terrorist and militia leader, Ahmad Shah. He ran a group known as the Mountain Tigers, which was up to no good, such as killing US military servicemembers.

They did not know what to expect when they found Shah and his camp. They were dropped off via chopper, hiking for hours through uneven terrain. They set up camp on a mountainside to avoid detection, but they were soon surprised by a goatherd. The goat herder and the soldiers were surprised to happen upon one another, and the murderous look Luttrell told 60 Minutes he received was one that he will never forget.

It was not long before more herders and dozens of goats converged on their location, but Dietz was unable to communicate by radio, so the team had to come up with a plan. They considered all their options, many of which involved the use of zip ties.

US military personnel must adhere to “rules of engagement,” which say that deadly force can only be used in particular circumstances, typically requiring the presence of “hostile intent.” This scenario was a grey area, because they were working on a feeling that they knew would not hold up in military court.

Maguire agreed that these unarmed non-combatants could not be killed under the rules, and had to either be simply detained as the SEALs waited for a helicopter rescue or let go. “You don’t shoot innocent people. You don’t shoot unarmed people, unless of course they pose a threat,” Maguire said.

Littrell said that the team discussed what to do, and ultimately the team leader said to let the goatherders go. Looking back, he wished that things had gone differently, because what unfolded next was unimaginable. In hindsight, he wishes that he had killed them.

Less than an hour later, enemy fighters showed up at the camp. The SEALs had dug out shelves to stand on and defend themselves. Dozens of forces were soon trickling in, and Littrell took the first shot to defend his team, setting off the ensuing firefight.

60 Minutes obtained video shot by enemy forces from that attack, most of which was too violent to be shown on television. These events are also the basis of the Mark Wahlberg movie Lone Survivor, opening in December 2013.

The film is adapted from Luttrell’s book, and he was one of the Navy SEAL consultants on the film. Enemy fire was continuous, and once they were being fired on from both sides, they loss any potential for advantage.

Luttrell said that his shelf crumbled, and he eventually tumbled down the mountain, taking out one of his teammates along the way. He broke his back and Mike Murphy injured his face during this, even as the SEALs continued to fire on their enemies as they attempted to move down the mountain.

About 90 minutes in, Luttrell was dragging Danny Dietz around looking for cover, while continuing to fire back at the opposition. Even Dietz continued to help fire, but as Luttrell spun his friend around toward another escape route, Dietz was struck by a bullet in the neck and killed.

That left only three men alive and fighting. Luttrell told Murphy that they had lost Dietz, and there was no way for the SEALs to advance up the mountain to recover their fallen friend. Then Matt Axelson found his remaining team members. He had been shot in the face and could not see.

At that point, Mike Murphy moved to an exposed position to call for backup on a satellite phone. He knew that this would probably cause his own death, and he was right. When Luttrell made his way to Murphy, gunfire broke out and his team leader started calling out for him.

“It got so intense that I actually put my weapon down and covered my ears, ‘cause I couldn’t stand to hear him die,” Luttrell said. He thinks of himself as a coward because of that moment of weakness.

Luttrell said that was the moment he found his breaking point, which he never thought could happen to him. But Marcus Luttrell was able to move on and pick that gun back up, returning to Axelson. He found him hiding under a rock, and he told his friend that they were both about to die.

Marcus Luttrell said that most people don’t know when they are going to die, but he had the weird feeling of knowing he was very close to death. There was nothing he could do to help his friend, and RPG fire blew them apart. That was the last time he saw Axelson.

“That was the longest night of my life,” Luttrell said. He spent it crawling and passing out on the mountainside, alone in the darkness. By the next day, with three broken vertebrae, bleeding, and two bullet wounds, he pressed on in search of water.

It was all he could think about at some point, despite the pain and circumstances. He had a laser focus and was determined to find water. Once he found it, he did not have much of a chance to drink before more enemies surrounded him.

Find out what happened next as this unbelievable story continued.