Over the last half century, Dame Maggie Smith has racked up accolades and adoring fans around the world. Most recently, she is generating renewed interest as the Dowager Countess of Grantham in the PBS Masterpiece series Downton Abbey.

The winner of two Oscars, three Emmys, and a Tony, Smith is popular in her home country as well as in the US. Now 78, Smith granted a rare interview to 60 Minutes. Her recent movie roles have included Quartet and The Best Exotic Marigold Hotel.

She compared being interviewed to giving court testimony, and she told Steve Kroft that she has no interest in fame. She said that her stardom has not changed her life. “I am familiar to people now, which is what I was not before,” she said.

Downton Abbey has put her in people’s homes each week, and the critically acclaimed drama is a success across the pond, as well as on PBS in America. Her character, a “privileged matriarch,” has earned her two Emmys, and she is always quick with a quip.

Smith said she had no idea how popular Downton Abbey would be, and told 60 Minutes she actually has never seen the show. She said she might watch the show once its run finally concludes, but otherwise she will only antagonize over her performance.

“The delight of acting” fueled Smith’s 60-year career, as she spurned her grandmother’s discouragements and debuted on Broadway at age 21. Later, she joined Britain’s National Theatre. 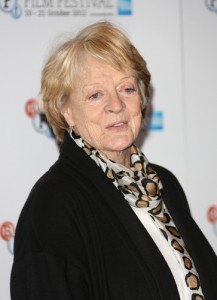 Her first big splash on film, according to Kroft, was The Prime of Miss Jean Brodie, which earned her an Academy Award. She portrayed the title character, who was passionate about her calling as a teacher.

Smith came across as modest about her own talents and cultural impact. “I don’t think actors can actually put a finger on it,” she observed. Her list of co-stars goes on for days, but she was mum about playing favorites.

Smith and Michael Caine co-starred in 1978’s California Suite, in which her character was an Oscar-nominated actress whose husband was harboring a secret. Though her onscreen character did not win her award, Smith did get another Oscar for the role as best supporting actress.

Smith has been known for her “spiky” characters that make other bristle. Her commitment to perfection means she is always on edge while at work. Her co-stars call her a professional who takes her performances seriously and keeps her standards high.

“They always seem to think that I’m scary, and I understand that totally. Old people are scary,” she said. “I am old and I am scary, and I’m very, very sorry about it, but I don’t know what you do.”

Downton Abbey creator and writer Julian Fellowes said that if Dame Smith is difficult, it is all about her commitment to the work. “For me, her bothering is worth attending to and listening to, because she ends up with a better product,” he said.

The role was written by Fellowes for Smith, who also created her character in Gosford Park. “She has a style as an actress, which is very, very rewarding for a writer,” he said, noting that she is dry and relies on emotional strength.

Fellowes said that Smith would be “the greatest loss” for the series, and she is currently filming a fourth season of Downton Abbey. Quartet marks her 53rd film, and she plays a diva in a movie by first-time director Dustin Hoffman.

Smith felt that Hoffman’s directing called upon his experience as an actor, which made her comfortable. He said he appreciated her candor about the work. He also got her to say the F-word for the first time on camera.

Hoffman revealed that she is very quick to say it off camera, comparing her to a sailor. They are friends in real life, as it turns out.

How does she feel about aging? “I don’t like it at all, but then I don’t know who does,” she said. “I can’t understand why everything has to go so fast.”

Her two sons from her first marriage to a former co-star are now both successful actors in their own right. Her second husband, the playwright Beverley Cross, was the love of her life, who has since passed away.

She admitted that she misses him and that life seems pointless without someone to share it with. However, she is not looking for a replacement, and she does have her five grandchildren to share her time with.

Smith has a house in London and a country home, and aside from “a tricky hip” and that pesky celebrity, life is good for her. She referred to the Harry Potter films as her pension, also offering her a new generation of fans and a decade-long relationship with her co-stars.

As for Downton Abbey, Violet is aging as well, so she suspects that story will eventually come to a close. Though she said she missed her retirement age, she does believe her life theatre days are over. But fans can take comfort in knowing that she has no plans to leave TV and movies behind.